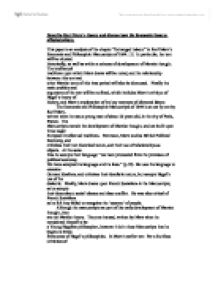 Describe Karl Marx's theory and discuss how his Economic theorys affected others.

Describe Karl Marx's theory and discuss how his Economic theorys affected others. This paper is an analysis of the chapter "Estranged Labour" in Karl Marx's Economic and Philosophic Manuscripts of 1844. [1] In particular, the text will be situated historically, as well as within a scheme of development of Marxist thought. The intellectual traditions upon which Marx draws will be noted, and the relationship between this text and other Marxist texts of this time period will also be discussed. Finally the main problem and arguments of the text will be outlined, which includes Marx's critique of Hegel's theory of history, and Marx's explanation of the key concepts of alienated labour. The Economic and Philosophic Manuscripts of 1844 is an early text by Karl Marx, written when he was a young man of about 26 years old, in the city of Paris, France. The Manuscripts contain the development of Marxist thought, and are built upon three major European intellectual traditions. Foremost, Marx studies British Political Economy, and criticizes their non historical nature, and their use of relationships as objects. At the same time he accepts their language: "we have proceeded from the premises of political economy. We have accepted its language and its laws." (p.70) He uses the language to examine German Idealism, and criticizes their idealistic nature, but accepts Hegel's use of the dialectic. ...read more.

Marx however, believed that Hegel was wrong for placing primary emphasis on the mind as the starting point for the history of society. In the Manuscripts, Marx argues that we think as a result of our society, and so the starting point of history should be a real society and its material basis. Marx also felt that Hegel's theory was too abstract and ignored important concepts of social organization for production when he explained reason as the driving force in history. In the chapter 'Estranged Labour' Marx argues from the view point of political economy, and notes that to examine society we must start with its material basis rather than the mind. Through Marx's emphasis on material facts in history, he is able to prove that in capitalistic societies we are not working towards freedom, nor constantly improving because were are not free from our material needs. Due to objective alienation, or alienation from the product of labour, the worker estranges themselves from the objective world through the act of production, while at the same time their employer enriches themselves. Marx notes that "the worker becomes all the poorer the more wealth he produces, the more his production increases in power and range. The worker becomes an ever cheaper commodity the more commodities he creates." ...read more.

Marx argues that "an immediate consequence of the fact that man is estranged from the product of his labour, from his life-activity, from his species being is the estrangement of man from man." (p.77) Hegel argued that man would need to develop a consciousness for all humanity in order to evolve towards a free society, but as Marx explains the capitalist worker is not progressing toward a free society, only further estranging themselves from the objective world, the work process and their fellow man. In this paper, the chapter "Estranged Labour" in Karl Marx's Economic and Philosophic Manuscripts of 1844 was analyzed. In particular, it was noted that it was an early text by a Young Hegalian Marx, in which he critiqued and synthesized British Political Economy, German Idealism, and French Socialism. Also discussed was the relationship of this text to the other Marxist works of this time. It was noted that the Manuscripts contained Marx's first break from Hegel, although he still considered himself to be a Hegalian philosopher. Finally the main problem and arguments of the Manuscripts were identified as Marx's critique of Hegel's theory of history of being too abstract, and having the mind as his starting point, instead of the material conditions of society. The key elements of estranged labour, namely objective alienation, alienation from self and alienation from species, were also explained in terms of Marx's belief in a material basis of society. ...read more.