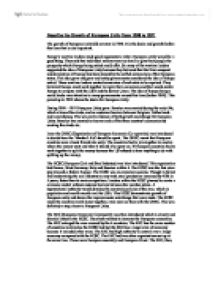 Later the OEEC (Organisation of European Economic Co-operation) was introduced to decide how the 'Marshall Aid' should be spent. The OEEC meant that European countries were almost forced into unity. The countries had to join together to resolve where the money went and what it should it be spent on. 10 European countries had to work together to split the money because the US refused to have anything to do with splitting up the money. The ECSC (European Coal and Steel Industry) was later introduced. This organisation had France, West Germany, Italy and Benelux within it. The ECSC was the first clear step towards a federal Europe. ...read more.

The EEC has the same number of countries involved as the ECSC had but the EEC has a larger slice of economy because it included other areas. The EEC had high authority in control over a larger economy compared with the ECSC. The EEC had two other organisations set up at the same time. These were European assembly and European Court. The EEC, then, increased the unity by the ways the countries communicate, the parliament and the court. In conclusion the growth of the European Unity is evidential. Firstly the size of the Unity went from nothing to 3 Benelux countries all the way to 6 countries in the EEC in the time frame of 1950-1957. During this time the European Unity had an increase in complexity and an increase in areas of activity. ...read more.