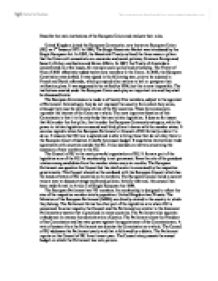 Describe the main institutions of the European Union and evaluate their roles. United Kingdom joined the European Community, now known as European Union (EU) on 1st January 1973. In 1986, The Single Economic Market was introduced by the Single European Act. In 1992, the Maastricht Treaty outlined the three areas or pillars that the Union will concentrate on: economic and social policies, Common Foreign and Security Policy, and Justice and Home Affairs. In 1997, the Treaty of Amsterdam concentrated on a few issues, for example social policy and citizenship. The Treaty of Nice of 2001 effectively added twelve new members to the Union. In 2003, the European Constitution was drafted. It was signed in the following year, only to be rejected in French and Dutch referenda, which prompted other nations to halt or postpone their ratification plans. It was supposed to be ratified by 2006, but this is now impossible. The institutions created under the European Union each play an important role and they shall be discussed below. The European Commission is made is of twenty five members, subject to the approval of Parliament. ...read more.

The European Parliament can question the Council but the chief control is exercised by the respective governments. This Council should not be confused with the European Council which has the heads of states of EU countries as its members. The European Council holds a summit twice a year to discuss strategy and broad policies. Initially informal, this council has been made formal in Article 2 of Single European Act 1986. The European Parliament has 732 members. Its membership is designed to reflect the size of the respective member state's population. United Kingdom has 78 seats. The Ministers of the European Parliament (MEPs) are directly elected in the country to which they belong. The Parliament forms the other part of the legislative arm where EU is concerned. In some respects, the Council and the Parliament are similar to the bicameral Parliamentary system that is practiced in many countries. The Parliament also appoints ombudsmen to oversee the administration of justice. The Parliament elects the President of the Commission and has veto power against the appointment of the Commissioners. A vote of censure from the Parliament can dismiss the Commission as a whole. ...read more.

European Union has established institutions that are fairly efficient in carrying out what they have been made to do. However, these institutions are not free from criticism. The rotating presidency role of the Council of EU, taken seriously before, was not considered to be wise as other non-EU governments complained about constantly shifting priorities and personnel of the council. An election for MEPs should be held across Europe, so that member states are not confined to vote for their own Ministers only. This would create MEPs that are 'truly Europe' and free from local political games. In January 2006, the Chancellor of Austria, Schusler, have criticised the ECJ by saying that the court has systematically increase its jurisdiction into matters that do not concern them. His comment was further strengthened by the Danish Prime Minister, Rasmussen, who said that the ECJ has decided in a way that was not politically agreed on before. The European Union has created institutions that serve their purposes and are fairly effective as a whole. However, as with anything else, there are areas for improvement, and EU should seriously look into this to function at its best. ...read more.