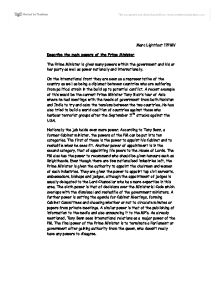 Describe the main powers of the PM

Marc Lightfoot 12PMV Describe the main powers of the Prime Minister The Prime Minister is given many powers within the government and his or her party as well as power nationally and internationally. On the international front they are seen as a representative of the country as well as being a diplomat between countries who are suffering from political strain in the build up to potential conflict. A recent example of this would be the current Prime Minister Tony Blair's tour of Asia where he had meetings with the heads of government from both Pakistan and India to try and calm the tensions between the two countries. He has also tried to build a world coalition of countries against those who harbour terrorist groups after the September 11^th attacks against the USA. Nationally the job holds even more power. According to Tony Benn, a former Cabinet minister, the powers of the PM can be put into ten categories. The first of these is the power to appoint his Cabinet and to reshuffle when he sees fit. ...read more.

Currently there is debate within political circles and the media over whether we have a prime ministerial government where the Prime Minister takes direct party and is likened to a President rather than the PM. The electorate now tend to vote for a party based upon the party leader, the potential PM, rather than the local MP in the constituency where they cast their vote. Take two of these powers and explain why they are important The Prime Minister has considerable powers of political patronage. This is no more clearly demonstrated than in the power of appointment to and dismissal from political office within the government. Once the Queen has appointed the Prime Minister, they are at liberty to form an administration of over one hundred government posts. However, the reality of political power means that there are always those who would automatically be given high-level posts in any government. These are mainly senior figures within the governing party such as Gordon Brown, Jack Straw and David Blunkett in the current Labour government. ...read more.