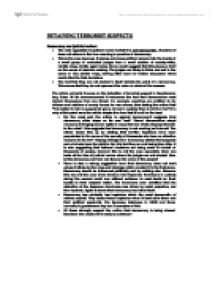 DETAINING TERRORIST SUSPECTS Democracy and judicial review: * The main opposition to judicial review is that it is anti democratic- therefore it does not adhere to the true meaning or practice of democracy. * This is the case because- it places enormous political powers into the hands of a small group of unelected judges from a small section of society-white, middle class, middle aged males. Some would suggest that this places a limit on the scope of decision making. The judges are likely to think and act in the same or very similar ways, leaving little room for further discussion which could alter the final decisions. * The fact that they are not elected in itself defeats the point of a democracy. This means that they do not represent the voice or minds of the masses. ...read more.

Saying 2 things here- democracy states that suspects and criminals have the right to fair trial but they are not being given this- it is also suggesting that national decisions are being made on behalf of thousands of people, however this is not the case especially when one looks at the idea of judicial review where the judges are not elected. How is this democracy and how can they be the voice of the people? * There is also a strong suggestion here that democracy does not work unless it sticks by the rules and ideology which created it in the first place. Democracy should be influenced politically and by nothing else. However this was not the case when America held Japanese Americans in custody during the second world war without evidence to cast doubt on their loyalty to their adopted nation. ...read more.

put the government right where it goes wrong in terms of subjects such as human rights and other breaches of convention which the government is prone to making. * The formation of a body to represent the detainees as the currently have no voice-therefore they cannot be protected- they have no knowledge of what actions they can legally take and so do not exercise their rights. * Making all nationalities involved EVEN In the end result. For example no British citizens in guantanamo bay will be executed. This brings a new dimension to the concept of "most favoured nation". There is no democracy in that. * The respective laws themselves should be reformed- i.e. courts in America have no jurisdiction to examine the legality of the detention of prisoners in Cuba. They have no means of knowing whether the actions being taken by the American government is legal. ...read more.