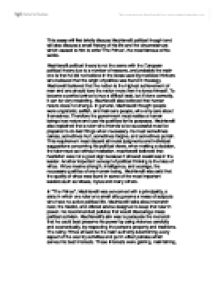 This essay will first briefly discuss Machiavelli political thought and will also discuss a small history of his life and the circumstances which caused to him to write 'The Prince', the most famous of his works. Machiavelli political theory is not the same with the European political theory due to a number of reasons, and probably the main one is that he did not believe in the ideas used by medieval thinkers who believed that the origin of politics was found in theology. Machavelli believed that the nation is the highest achievement of man and one should love the nation more than he loves himself. ...read more.

Machiavelli also explained that a ruler who intends to be successful must be prepared to do bad things when necessary. He must sometimes caress, sometimes hurt, sometimes forgive, and sometimes punish. This requirement must discard all moral judgments and individual suggestions concerning his political views. when making a decision, the ruler must act without hesitation. machiavelli believed that hesitation was not a good sign because it showed weakness in the leader. Another important concept of political thinking is the idea of virtue. Virtue means strength, intelligence, and courage, the necessary qualities of any human being. ...read more.

He recommended policies that would discourage mass political activism. Machiavelli's aim was to persuade the monarch that he could best preserve his power by using violence carefully and economically, by respecting the persons property and traditions. The ruling Prince should be the main authority determining every aspect of the country activities and put in effect policies which serves his best interests. These interests were gaining, maintaining, and expanding his political power. However, Machiavelli did not feel that a Prince should mistreat his citizens. This suggestion is once again to serve the Prince's best interests. If a prince can not be both feared and loved, Machiavelli suggests, it would be better for him to be feared by the citizens within his own principality. ...read more.