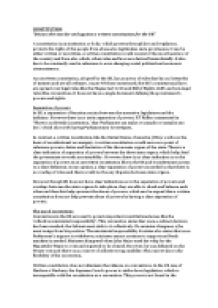 ﻿CONSTITUTION ?Discuss the case for and against a written constitution for the UK? A constitution is an institution or body, which governs through law and regulation, protects the rights of the people from abuse also legitimizes state governance. It can be either written or unwritten. A written constitution would consist of the most basic law of the country and from also which, other rules and laws are derived hierarchically. It also has to be constantly read in reference to ever-changing social, political and economic circumstances. An unwritten constitution, adopted by the UK, has an array of rules that has no hierarchy of statutes and are all ordinary. As per AV Dicey mentioned, the UK?s constitutional laws are spread over legal rules like the Magna Cart 1215 and Bill of Rights 1689, and non-legal rules like conventions. It does not have a single document defining the government?s powers and rights. ...read more.

If a minister disagrees, s/he must resign from his position. The ministerial responsibility doctrine also states that once Parliament?s support is withdrawn, ministers cannot continue to support and fresh mandate is needed. Ministers disagreed when John Major used the whip for the Maastricht Treaty to vote and expected to be obeyed. However, he was defeated on the Treaty vote and there was a waiver of collective responsibility. This waiver shows the flexibility of the convention. Written constitution does not eliminate the reliance on conventions. In the US case of Madison v Marbury, the Supreme Court?s power to strike down legislation, which is incompatible with the constitution as a convention. This power is not found in the constitution, but was acknowledged in a judicial decision and has since became a constitutional practice. Thus this upholds Sir Ivor Jennings stance on conventions where ?they provide the flesh, which clothes the dry bones of law.? The flexibility of rules The UK?s constitution is flexible and all legal rules are made through the ordinary legal manner and is not safeguarded with entrenchment unlike the unwritten constitution. ...read more.