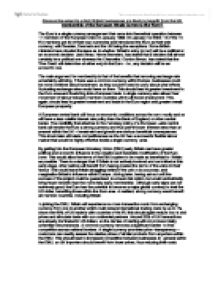 Discuss the extent to which British businesses are likely to benefit from the UK membership of the European Single Currency (the 'Euro').

Discuss the extent to which British businesses are likely to benefit from the UK membership of the European Single Currency (the 'Euro') The Euro is a single currency arrangement that came into theoretical operation between 11 members of the European Union in January 1999. On January 1st 2002, 12 of the 15 EU members got rid of their own currencies and introduced the Euro as their sole currency, with Sweden, Denmark and the UK being the exceptions. Some British ministers have clouded the issue as to whether Britain's entry (or not) will be a political or an economic decision. Jack Straw, Home Secretary, has stated that a decision will almost certainly be a political one whereas the Chancellor, Gordon Brown, has stated that the 'Five Tests' will determine whether we join the Euro - i.e., any decision will be an economic one. The main argument for membership is that of the benefits that removing exchange rate uncertainty will bring. If there was a common currency within Europe, businesses could be more confident about investment, as they wouldn't need to worry about what effects fluctuating exchange rates would have on them. This should lead to greater investment in the Euro area and flourishing intra-European trade. ...read more.

Will the Euro be successful? I would tentatively suggest that the answer to these questions is, in the long term, yes. On this basis I suggest that it is best for Britain to join sooner rather than later. There is a real risk of failure and there will undoubtedly be problems in the short to medium term, but I feel the risk is worth taking. Britain's current decision not to enter the single currency allows the UK to continue as a self-governing flexible nation enjoying a period of sustained economic growth and stability; favourable to UK businesses, however, in my opinion, Britain's acceptance of the Euro seems inevitable at some point, partly in the interest of the economy and businesses (in order to avoid loss of European trade and competitiveness) - but ultimately driven by the desire for a more distinct European identity and to support political motives. Conclusively I think in principle Britain should join, but only when appropriate measures have been taken to ensure convergence and economic stability. I think the such as the Chancellor's '5 Tests' idea before entry is a sensible one, but unfortunately it seems they have been designed for use as a political tool. I can only hope that this decision is focused more on Britain than the Labour party. ...read more.