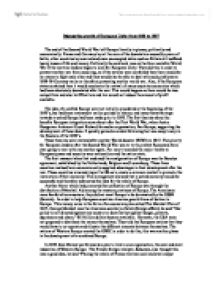 Discuss the growth of European Unity from 1950 to 1957 The end of the Second World War left Europe literally in pieces; politically and economically. France and Germany lay at the core of the devastation caused by years of battle, other countries lay scarred and even unoccupied states such as Britain still suffered heavy losses of life and money. Politically the continent was on the floor and after World War II the wartime leaders began to look for European Unity. They did this in order to prevent another war from occurring, as if the nations were combined then there would be no reason to fight each other and they would also be able to deal with such problems as 1938-39 Germany early on therefore preventing another world war. Also, if the European states combined then it would accelerate the revival of many countries economies which had been absolutely devastated after the war. This would happen as there would be less competition and also tariff barriers and tax would not reduce the amount of profit available. The idea of a unified Europe were not initially considered at the beginning of the 1950's, but had been reviewed at earlier periods in history, and many tentative steps towards a united Europe had been made prior to 1950. The first theories about the benefits European integration came about after the First World War, when Austro Hungarian Aristocrat Count Richard formed an organisation, Pan Europa, supporting the development of these ideas. ...read more.

will be a first step I the federation of Europe. This action will make it plain that any war between France and Germany would be impossible." This was his reason for wanting European unity. In 1952 Robert Schuman and Jean Monnet initiated what was to be the European Coal and Steel Confederation (ECSC). Coal and steel are essential for a society to function and this is why these industries were combined first. The linking of these industries was crucial for economic recovery, and for the first time in Europe national sovereignty was abridged for a greater purpose. Another key purpose of it was to improve Franco-German relations, which were non-existent due to the occupation. The countries that signed up to the ECSC were France, West Germany, Italy and the Benelux countries. These small states have always been instrumental in European integration and had strong federalist sentiments, from a backlash against the resurgence of nationalism. Although the founding of the ECSC was only a small step towards unification, it was the first time European countries had given significant powers to a supranational government. This government was allowed to reduce tariff barriers, fix prices and abolish subsidies. The ECSC was formed to achieve the creation of a common market for coal and steel, but it had ultimately been created to start the development of a united Europe. ...read more.

The EURATOM treaty also created a common market of atomic energy. This was conducted it the same manner as the EEC and the ECSC and also strengthened the joining of Europe further. It made the six countries as equals in terms of nuclear technology and was a step closer to being equal technologically in all areas. The nuclear aspect was a large issue as it is another essential building block for a society, like coal and steel. By 1945 many wartime leaders were turning to European Unity in order to prevent another war and also to elevate their countries economy. Many trials and steps had been made towards European Unity had been made by 1950, for example, the Benelux agreement and the formation of the OEEC. However, by 1950 six countries were now pushing for a combined Europe. This began with the ECSC and then the EEC, these organisations developed the unification of these six countries economies and this was a major step towards complete unity. EURATOM also saw the joining of the six through technology, creating a new branch for unity that would be later expanded on. European unity had grown substantially in the years between 1950 and 1957 and left it ready for possible expansion. They set up a European assembly and a court of justice so there is now the potential for the combining of Europe not just economically but politically as well. By David Alison ...read more.