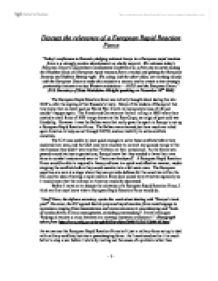 Discuss the relevance of a European Rapid Reaction Force.

Discuss the relevance of a European Rapid Reaction Force "Today's conference in Brussels pledging national troops to a European rapid reaction force is a strongly positive development we wholly support. We welcome today's European Union's Capabilities Commitment Conference as a first step towards making the Headline Goal of a European rapid reaction force a reality and getting the European Security and Defense Identity right. We, along with the other Allies, are working closely with the European Union to make this initiative a success and to create a true strategic partnership between two key Western institutions -- NATO and the European Union." (U.S. Secretary of State Madeleine Albright speaking on November 20th 2000) The European Rapid Reaction force was initially thought about during the late 1940's, after the signing of the Brussels's treaty. Many of the leaders of Europe at that time knew that an event such as World War II with its monumental loss of life just couldn't happen again. The French and Germans set the ball rolling in 1992 when they created a small force of 1000 troops known as the EuroCorps, as a sign of post cold-war friendship. However it was the Balkan wars that really gave the spark to Europe to set up a European Rapid Reaction Force. ...read more.

"Basically, what the EU is trying to create is a collective security mechanism through a force that is robust enough to act quickly and effectively in crises, but flexible enough to be deployed in various forms and sizes for a complex range of missions." (Dr Caroline Lucas, Green Party MEP for the South East Region and member of the Green/European Free Alliance Group of the European Parliament) In respect to the Kosovo war, the relevance of a European Rapid Reaction Force in today's modern society is certainly valid in that if we had of had this force at the time of the Kosovo conflict, then we might have been able to stop the conflict before it had escalated resulting in thousands of deaths. The main goal of this force is stop a major conflict happening before it starts and I believe that the Rapid Reaction Force would have been able to do this had it been in place during the Kosovo War. We can't keep relying on America to send over its military power through NATO every time we have a conflict in Europe. Collectively we are powerful enough to form a force that is in every way a match for the American military army and so a building up a rapid reaction force should be a priority of Europe's. ...read more.

We need some sort of force to protect our own interests within Europe, and the European Rapid Reaction Force seems to be the perfect solution. We will be able to sort out these conflicts quickly and easily as the basis of the force is on its "rapid" deployment. If it can stem the problem before it escalates then deaths will be kept to a minimum which is one of the primary goals of the Rapid Reaction Force. The ERRF will also alleviate some of the pressure on NATO allowing it to redeploy its troops which were in Europe to other parts of the world. All in all the ERRF will hopefully help to make the world a safer place which is what the majority of the people in the world want. In that respect I believe the relevance of a European Rapid Reaction Force is guaranteed, and if it can do what it has set out to do then I believe Europe will be thankful for its increased security. "I am excited with the European decision to set up a Rapid Reaction Force of 50 to 60,000 men all ranks. We ourselves are going through a reform of our own peacekeeping operations and I think that you're going to see far greater co-operation between the EU and the UN." (United Nations Secretary general Kofi Annan) Word Count - 2284 words - 1 - ...read more.