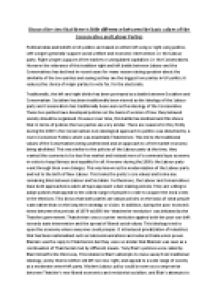 ﻿Discuss the view that there is little difference between the basic values of the Conservative and Labour Parties Political ideas and beliefs in UK politics are based on either left wing or right wing politics. Left wingers generally support social welfare and economic intervention i.e. the Labour party. Right wingers support a free market or unregulated capitalism i.e. the Conservatives. However the relevance of this tradition right and left battle between Labour and the Conservatives has declined in recent years for many reason raising question about the similarity of the two parties and seeing as they are the biggest two parties in UK politics it reduces the choice of major parties to vote for, for the electorate. Traditionally, the left and right divide has been portrayed as a battle between Socialism and Conservatism. Socialism has been traditionally been viewed as the ideology of the Labour party and Conservatism has traditionally been seen as the ideology of the Conservative. ...read more.

Thatcherism was a counter revolution against both the post war drift towards state intervention and the spread of liberal social values. This ideology tried to open the economy where everyone could prosper. It introduced privatization of industries that had been nationalised such as telecommunications and reduced trade union power. Blairism was the reply to Thatcherism but they were so similar that Blairism was seen as a continuation of Thatcherism but by different means. Tony Blair?s policies were called by Blair himself is the third way. This relates to Blair?s attempts to move away from traditional ideology, policy that is neither old left nor new right, and appeal to a wide range of society as a moderate centre-left party. Modern Labour policy could be seen as a compromise between Thatcher?s neo-liberal economics and revisionist socialism, and Blair?s attempts to move away from traditions shows the emphasis on broad public support in modern politics rather than conflicting ideas. ...read more.

In conclusion, It could be argued that modern party politics in the UK has little relevance to traditional ideologies. During the 20th century, the United Kingdom has been dominated by Liberalism, and the acceptance of the change needed after the Second World War to promote stability by the Conservative Party led to Labour and the Conservatives pursuing similar social democratic ideas, based around Keynesian economic policy. This changed during a period of crisis in the 1970s, and both parties became more radical in their approach, with the Conservatives becoming part of the new right and Labour returning to socialist ideas. However, Labours modernisation throughout the 1980s and 1990s has led to a new period of classical liberal consensus. The ideological gap between the major parties has become almost indistinguishable, with both parties in broad agreement on the principle of the free market and greater public spending at the 2005 General Election, and Blairs avoidance of ideological classification shows the emphasis on election victory, not wishing to alienate members of the electorate to gain popular support. ...read more.