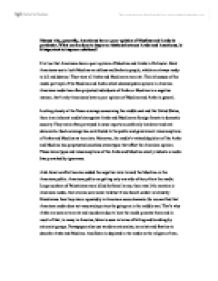 American public are getting only one side of story from the media. Large numbers of Palestinians were killed by Israeli army, there was little mention is American media, their stories were never told but if one Israeli soldier is killed by Palestinians then they show repeatedly in American news channels. So we can find that American media does not accurately portray the going-on in the middle east. That's why Arabs are seen as terrorist and murderers due to how the media presents them and in result of that, to many in America, Islam is seen in terms of killing and bombing by extremist groups. ...read more.

The media must accept responsibility for being the major force in presenting the negative view of Muslims and it should accept responsibility by providing more balanced image of Arabs and Muslims. American government and media should tell the public the fact that the war is against a small group of terrorist who may be Muslims, and it is not the war against Islam. Islam is not the religion of war and destruction, it is a religion of peace. Islam didn't allow any one to kill civilians, diplomats and innocent peoples. That's why terrorists are not true Muslims. It will be more effective if media provide the more balanced news of both Israeli and Palestine and also educate the American public about Islam and its basic principles so that they can differentiate between Muslims and terrorists. ...read more.