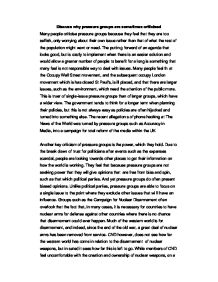 Discuss why pressure groups are sometimes criticised Many people criticise pressure groups because they feel that they are too selfish, only worrying about their own issue rather than that of what the rest of the population might want or need. The putting forward of an agenda that looks good, but is costly to implement when there is an easier solution and would allow a greater number of people to benefit for a long is something that many feel is not responsible way to deal with issues. Many people feel that the Occupy Wall Street movement, and the subsequent occupy London movement which is has closed St Paul's, is ill placed, and that there are larger issues, such as the environment, which need the attention of the public more. This is truer of single-issue pressure groups than of larger groups, which have a wider view. The government tends to think for a longer term when planning their policies, but this is not always easy as policies are often hijacked and turned into something else. The recent allegations of phone hacking at The News of the World was turned by pressure groups such as Accuracy in Media, into a campaign for total reform of the media within the UK Another key criticism of pressure groups is the power, which they hold. ...read more.

This single mindedness does however enable the groups to do more than if they were focusing on a wider picture. They are not running for office, all they are trying to do is represent this people that are members of the group, who are members because the think that what the group is doing is right, and so to this end, pressure groups, despite the heavy criticism that they get, are doing exactly what it is that they are meant to be doing. The tactics that are used by pressure groups are the main reason why they sometimes are criticised by the media and the public. This is because they often break the law. Due to repeated breaking of the law the Animal Liberation Front (ALF) has been banned on both sides of the Atlantic Ocean because the methods that it uses are seen to be too like those that are used by terrorist organizations. ALF violently breaks into facilities that use animals for testing and frees them. The groups does not seem to care about either damage to people or property, which is something that most of the public would find hard to condone, and therefore criticise. The people that are harmed by some members of pressure groups are often innocent. ...read more.

It is not only violence that can lead to a pressure group being criticised. The Occupy London movement, which in 2011 was camped outside st Paul Cathedral in London, forced the Cathedral to be closed down for the first time since the second world war due to the fact that it blocked up the main entrance and those that run the Cathedral did not want the protestors to be inside the Cathedral. This shows that even the effects of a peaceful protests that remains peaceful can be detrimental to the cause of any one group, should it have an affect on daily lives that is undesirable. Another issue within the Occupy London movement that has led to a great deal of criticism is the fact that a lot of those that protest during the day leave at night, despite the city of tents that are at the protest site for them to be used. A single tent there has housed 8 different people at different times since the protest started. This apparent lack of commitment has caused the media to criticise the reasons why many of the people were protesting there. The strength of the protest, which was focused on any capitalism and anti corporations, when members of the group protesting were photographed going into Starbucks to purchase drinks. This all goes to show that when the media is against a group, even the small things that they do can be criticised heavily. ...read more.