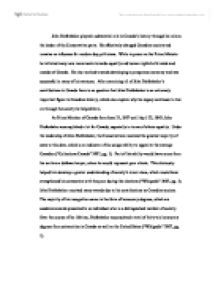 John Diefenbaker played a substantial role in Canada's history through his role as the leader of the Conservative party. He effectively changed Canadian society and remains an influence for modern day politicians. While in power as the Prime Minister he initiated many new movements towards equality and human rights both inside and outside of Canada. He also worked towards developing a prosperous economy and was successful in many of his ventures. After examining all of John Diefenbaker's contributions to Canada there is no question that John Diefenbaker is an extremely important figure in Canadian history, which also explain why his legacy continues to live on through the society he helped form. As Prime Minister of Canada from June 21, 1957 until April 22, 1963, John Diefenbaker accomplished a lot for Canada, especially in terms of ethnic equality. Under the leadership of John Diefenbaker, the Conservatives received the greatest majority of seats to this date, which is an indicator of his unique ability to appeal to the average Canadian ("Collections Canada" 2007, pg. ...read more.

1). He also appointed the first female Cabinet minister, which helped open the door to change in Canada's political structure ("Collections Canada" 2007, pg. 1). . Diefenbaker's role of promoting human rights was just as prominent inside Canada, as it was a outside of Canada, through his support for the independence of several Commonwealth countries. His support for human rights and equality caused him to oppose apartheid in South Africa, and refuse to assist the United States in the hostility towards Cuba. It was because of John Diefenbaker's fundamental principles involving equality which inspired, and continues to inspire people to this day. He is still considered a "spiritual father" to the Conservative party due to his major contributions during his time in power. Many Conservative party members have based their political traditions, values and stances on Diefenbaker's principles. John Diefenbaker also influenced a young Pierre Trudeau with his decision to oppose the use of nuclear warheads on Bomarc missiles. ...read more.