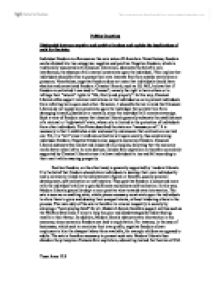 Distinguish between negative and positive freedom and explain the implications of each for the state.

Politics Questions Distinguish between negative and positive freedom and explain the implications of each for the state. Individual freedom is often seen as the core value of Liberalism. Nevertheless, freedom can be divided into two categories: negative and positive. Negative freedom, which is traditionally associated with Classical Liberalism, advocates the belief in non-interference, the absence of all external constraints upon the individual. This implies that individuals should be free to pursue their own interests free from outside restrictions or pressures. Nonetheless, negative freedom does not mean that individuals should have absolute and unrestricted freedom. Classical liberals, such as J.S. Mill, believe that if freedom is unlimited it can lead to "license", namely the right to harm others or to infringe their "natural" rights to "life, liberty and property". In this way, Classical Liberals often support minimal restrictions on the individual so as to prevent individuals from inflicting harm upon each other. ...read more.

The main duty of the sate is therefore to remove inequality in society by allowing a "level playing field" for all. Modern Liberals therefore support entities such as the Welfare State since it aims to help the poor and disadvantaged by redistributing wealth in their favour. In addition, Modern liberals advocate state intervention in the economy, since economic freedom can lead to exploitation. For instance, in the case of businesses, which seek to maximise their own profits, negative freedom allows employers to hire the cheapest labour force available, for example children as opposed to adults. The sate is therefore necessary to prevent such acts. Modern Liberals thus abandon the principles of laissez-faire capitalism, advocating instead the theories of J.M. Keynes. Keynes put forward the idea of regulation of equality in the economy through the injection of money into the system. Only in this way, with key economic responsibilities being placed in the hands of the state, could growth and prosperity be maintained. ...read more.

Only within a free market of ideas will "truth" emerge, as good ideas displace bad ones, Furthermore, toleration and pluralism lead to a balanced and harmonious society. Liberals believe that while groups with conflicting beliefs and interests should be free to develop, pluralism and toleration allow these groups to co-exist peacefully, accepting each other's different beliefs. Toleration and pluralism thus allow humans, who are all unique and individual, to express their various beliefs and ideologies freely within society. It should also be noted that Liberals support pluralism since it promotes distribution of political power. With power widely and evenly dispersed in society, rather than concentrated in the hands of the elite, pluralism complements democracy and ensures that those in charge respect the concerns and interests of the individual. In conclusion, it can be seen that pluralism and toleration are widely supported by liberals since they promote individual sovereignty whilst benefiting society at the same time. Tessa Jones 13.9 ...read more.