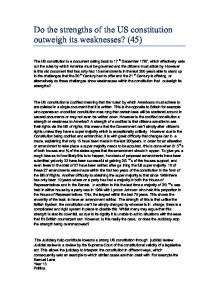 Do the strengths of the US constitution outweigh its weaknesses?

Do the strengths of the US constitution outweigh its weaknesses? (45) The US constitution is a document dating back to 17th December 1787, which effectively sets out the rules by which America must be governed and the citizens must abide by. However is this old document that has only had 15 amendments in the last 200 years able to stand up to the challenges that the 20th Century had to offer and the 21st Century is offering, or alternatively do these challenges show weaknesses within the constitution that outweigh its strengths? The US constitution is codified meaning that the 'rules' by which Americans must adhere to are collated in a single document that it is written. This is the opposite to Britain for example who operate an uncodified constitution meaning that certain laws will be scattered around in several documents or may not even be written down. However is the codified constitution a strength or weakness to America? A strength of a codified is that citizens are able to see their rights via the bill of rights; this means that the Government can't simply alter citizen's rights unless they have a super majority which is exceptionally unlikely. However due to the Constitution being codified and entrenched, it is with great difficulty that changes can be made, explaining that only 15 have been made in the last 200years. ...read more.

Another issue would be whether the Supreme Court is right to question legislation but forward by the elected government? A more democratic view would state that this enables the minorities to have a say against legislation that could potentially prosecute them. This type of action is done through the Checks and Balances system. The checks and balances is a feature much like the Supreme Court that allows the three sections of the American system to be held to accountability. The three parts would include the executive, legislature and judiciary. This is a system of government in which each branch exercises control over the actions of other branches of government. The main checks are done by the legislature on the executive and include amend/delay/rejecting legislature, power of the purse, confirmation of appointments within the senate, impeachment, trial, conviction and removal from office, etc. This is undoubtedly a strength of the US constitution as it allows each branch of government's power to be restricted whilst allowing them to still carry out their job effectively. A weakness of the system is that it potentially doesn't carry out its job as effectively when the houses are controlled by the president's party and hence the level of scrutiny weakens. In addition to this, when the house(s) ...read more.

or just having a desire to succeed, they argue that the best ideas have come when there has been little interference such as when Microsoft was created. Overall they believe in states' rights. The conservatives are severely unhappy with the constitution as they believe that it is interfering too much in the lives of citizens by placing too many restrictions, an example of discontent would be when the NCLB Act 2001 was introduced that got involved at a central level in education, which they strongly felt was a state issue. The centralists believe that the constitution is well balanced as citizens are given enough freedom without restricting government's effectiveness and that history has shown that the constitution stands up. In conclusion it is obvious to see that the US has both weakness - in the form of elections, power to declare war and the conservative view - and positives - as shown by the test of time, its rigidity yet ability to evolve and its check and balances system. I would argue that the positives do outweigh the weaknesses as the constitution has proved over the last 200 years that while it is rigid enough to stop government intervention where not deemed appropriate it has also been able to evolve, as well as allowing citizens to understand their rights. ?? ?? ?? ?? Samuel Lane Year 13 Politics. ...read more.