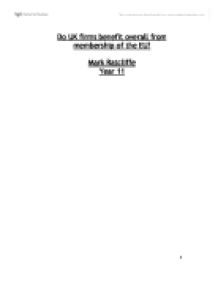 Do UK firms benefit overall from membership of the EU?

Do UK firms benefit overall from membership of the EU? Mark Ratcliffe Year 11 Introduction The European Union is a coming together of 15 member states aiming towards a brighter future. One goal of this union is to thrive in trade and commerce and to do this measures were taken to make it easier for firms and businesses in Europe to expand and flourish. In the following paragraphs I will explain the benefits and problems for firms who are part of this organisation. Benefits When the European Union came together rules and regulations were decided and agreed upon between all of the states involved. One of these rules, the legal minimum wage has been set throughout all EU states so that now no firm in any EU country can pay their worker(s) less than the amount agreed. This not only induces fairness among all EU states but gives no country any advantages or disadvantages over another country so that all will be on a fair level with each other. ...read more.

once these were abolished a lot of firms grew very quickly and so expanded into Europe increasing the economy of Europe. Because firms can now transport goods to places within the EU cheaply there is no need to sell to America like most did before because it was cheaper. The benefit of this is simple, places in Europe are much nearer to our own country hence the transport and postage costs will be cheaper for firms. Another very simple benefit to firms is that when we entered the EU the number of customers available to sell to grew threefold and more as now firms have the whole of Europe to sell to and 3 more countries who are joining in the next three to six years. I believe the amount of potential customers now within the EU. is 460 million. The increase of good sales due to all these points shown above undoubtedly means that firms will need to produce more of the good they are selling. ...read more.

Doing business with other countries in the EU has meant that some language barriers will be evident. There is bound to be problems at present and in the near future concerning complicated terms that most businesses use when doing business. Balanced Conclusion I think it is more beneficial to firms in the UK to being within the EU judging by the amount of benefits in relation to the number of problems. The dismissal of tariffs and taxes on goods within the EU has made it much easier for firms to deal in bisiness and the EU has recently seen a large increase in company size and amount of trade since January 1st 1993. Most if not all firms in the UK have benefited from one or more outcomes of being in the EU whereas most of the problems only apply to big businesses or our country as a whole. If the choice was given to British firms, 'Do you want to stay in the EU or not,' I'm very sure that 95% of the people in question would agree to stay. 1 ...read more.