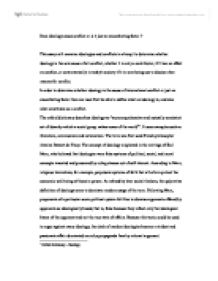 Does ideology cause conflict or is it just an exacerbating factor ?

Does ideology cause conflict or is it just an exacerbating factor ? This essay will examine ideologies and conflicts in attempt to determine whether ideology is the sole cause of all conflict, whether it is only a contributor, if it has no affect on conflict, or controversially in today's society if it is now being use to discise other reasons for conflict. In order to determine whether ideology is the cause of international conflict or just an exacerbating factor then we must first be able to define what an ideology is, and also what constitutes as a conflict. The oxford dictionary describes ideology as "any comprehensive and mutually consistent set of ideas by which a social group makes sense of the world1". It uses examples such as liberalism, communism and nationalism. The term was first used French philosopher Antoine Destutt de Tracy. The concept of ideology originated in the writings of Karl Marx, who believed that ideologies were false systems of political, social, and moral concepts invented and preserved by ruling classes out of self-interest. According to Marx, religious hierarchies, for example, perpetuate systems of faith that at bottom protect the economic well-being of those in power. ...read more.

He believes the cold war to be a Battle of the ideologies. Therefore, his views can be used to argue that the cold war can be said to be. However other historians differ in opinion they believe other factors contributed to the occurrence of the cold war. Revisionists believe that US are at fault due to open door policies. Yet many others believe that it was simply due to a struggle of power between two super-states USSR and US. Another example of a conflict which can be argue to be due to ideological difference between capitalism and communism is Vietnam, whereby the American fear of their ideology lead to a huge war resulting in a mass number of deaths. The situation within Cuba is another key example of an ideological conflict. Cuba, while has never suffered from an actual war with other countries due to its communist regime it has yet been in a state of conflict with the USA, this has been upheld though economic constraints, such as the embargo place on Cuba. Another form of ideology that within the area of conflict is significant is nationalism; this ideology is at the basis of many conflicts that takes place between two countries, as its belief is the superiority of a nation over every other nation. ...read more.

However the true reason is often due to the wish economical dominance over other countries, such as the recent war with Iraq, many including names such as Tony Benn believe that the key reason that the USA declared war on Iraq was due to the oil within the country. Within this view ideologies are used as a discise, the true reason for conflict thus being economical. It is therefore possible to conclude that ideological differences have resulted in a number of conflicts however it is very difficult to judge as it is hard to define what clarifies as an ideology or what does not. Yet, the essay concludes that factors such as money, power, and land are also highly influential when it comes to the causes of conflict, especially in today's society. BIBLOGARPHY - Oxford dictionary, oxford university press, 2002 - Leon P. Baradat, political ideologies, their origins and impact, eighth edition, prentice hall, 2003 - Barbra Goodwin, using political ideas, fouth edition, wiley, 2001 - Thomas Sowell, a conflict of visions, ideological origins of political struggles, basi books, 2002 - J. Schwarzmantel, the age of ideology, Macmillan press, 1998 1 Oxford dictionary - Ideology 2 oxford dictionary - conflict 3 using political ideas - chap 11 - 249, Barbra Goodwin ...read more.