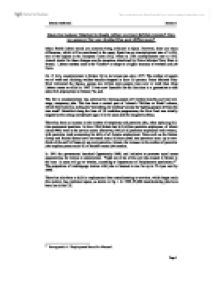 Does the Labour Market in Spain reflect current British trends? Can we account for any similarities and differences?

Does the Labour Market in Spain reflect current British trends? Can we account for any similarities and differences? Many British labour trends are currently being reflected in Spain. However, there are many differences, which will be considered in the essay. Spain has an unemployment rate of 14.2%, one of the highest in the European Union (EU), where as UK's unemployment rate is 5.5%. Aznar's model for these changes are the measures introduced by Prime Minister Tony Blair in Britain. Labour markets need to be "flexible" to adapt to a higher intensity of workers and job flows. On 15 July, unemployment in Britain fell to its lowest rate since 1975. The number of people out of work and claiming welfare benefits dropped in June 5.6 percent. Prime Minister Tony Blair welcomed the figures, saying one million more people were now in work than when Labour comes to office in 1997. It was now "possible for the first time in a generation to talk about full employment in Britain," he said. The fall in unemployment was achieved by forcing people off welfare benefits and into low-wage, temporary jobs. This has been a central part of Labour's "Welfare to Work" scheme, which Blair hailed as ending the "something for nothing" society by "getting people off benefits into work". Modelled along the lines of US workfare programmes, the New Deal was initially targeted at the young unemployed ages 18 to 24 years and the long-term jobless. There has been an increase in the number of temporary and part-time jobs, often replacing full-time permanent positions. ...read more.

In contrast, Britain's youth unemployment rate is 15%, almost half of Spain's youth unemployment rate. Fig 10: Youth jobless rate in Spain. As seen on fig 11, after hitting more than 42% in 1996, the youth jobless rate slipped back under the 30% mark in 1999. In effect, the labour force has increased. In terms of future employment in Spain, fixed-term contracts are significantly less important than permanent contracts. This is due to their much shorter duration, which accounts for just 2% of that of permanent contracts. In contrast, Britain encourages for fixed-term contracts. We can account for many similarities between the labour trends in the UK and Spain. These include, a change in the nature of jobs available, with an increase in the number of women employed, against a decrease in male employment. Moreover, a significant increase in part time and self-employment is linked to continued increase in flexible working methods, including teleworking. A good example of this similarity would be Blair and Aznar's joint statement earlier this month, published in the Financial Times and El Mundo, outlining their common stance on the deregulation and liberalisation of industry.(3 Both leaders played a major part in orchestrating the EU's pledge at the Lisbon summit in March to copy US-style labour market flexibility. As far as the differences are concerned, these include the vast contrast in the unemployment rates between those two countries, and that Spanish enterprises, require six to nine months of preparatory legal work before they are ready to open for business, whereas in Britain a company can be established in half a day. ...read more.

Both leaders played a major part in orchestrating the EU's pledge at the Lisbon summit in March to copy US-style labour market flexibility. Blair is keen to encourage Aznar's liberalising zeal to answer complaints of heavy-handed regulation within the EU by the Eurosceptics inside his own party and within the British political establishment generally. For his part, Aznar has used the relationship with Blair to strengthen his image at home and to increase Spain's political weight within the EU. Aznar has demanded that Spain be given parity with the "Big Four"-Germany, France, Britain and Italy-in an enlarged European Union. At present, the four control ten votes each in the Council of Ministers, compared with Spain's eight. The government is concerned that Spain will lose funding and be marginalised when poorer countries from central and Eastern Europe are admitted to the EU. Aznar argued: "If we are creating more than half the employment in Europe, if we have liberalised markets faster than anywhere else, if we have balanced our budget and lowered taxes-then I think that Spain has the right to a greater say." Most of all, the assertion of the Anglo-Iberian alliance is designed as a counterweight to the Franco-German axis. The German and French governments recently voiced their intentions to create a "core" group within the EU, which, under their leadership, would help speed European integration. In their joint statement, Blair and Aznar warned, "some of us may wish to go a bit further a bit faster on political reform, but all must respect rules and procedures of the Union. There can be no second class citizens in Europe." Copyright 1998-2000 (1 See appendix 1: "Employment Boom For Women". (2 See appendix 2: "Spain Has Changed" (3 See appendix 3: Mamta. Sadhwani Module 1 Page 1 ...read more.