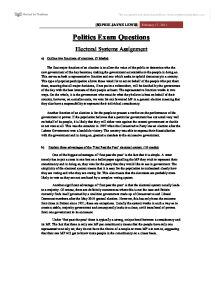 Politics Exam Questions Electoral Systems Assignment a) Outline two functions of elections. (5 Marks) The first major function of an election is to allow the voice of the public to determine who the new government of the day becomes, making the government accountable to the people in doing so. This serves as both a representative function and one which seeks to uphold democracy in a country. This type of popular participation allows those voted for to act on behalf of the people who put them there, ensuring that all major decisions, if not put to a referendum, will be decided by the government of the day with the best interests of their people at heart. The representative function works in two ways. On the whole, it is the government who must do what they believe is best on behalf of their country, however, on a smaller scale, we vote for our favoured MP in a general election meaning that they also have a responsibility to represent their individual constituency. Another function of an election is for the people to present a verdict on the performance of the government in power. ...read more.

Proportional representation is used predominantly across the Europe and this has consequently put pressure on the British government to conform to this type of voting system now that we are a member of the European Union. However, it can definitely be argued that it is not just for this reason that the introduction of PR voting systems is for the best. As is given away in its name, proportional representation endeavours to represent the people of the country fully by allocating seats in proportion to number of votes received by each party. As most PR voting systems are totally proportional, such as the party list system, there are no wasted votes. This idea sounds very attractive, especially to those who feel that the party they wish to see in Parliament will never have enough votes to achieve this or for those who feel they have to vote tactically. The elimination of wasted votes should potentially increase the turn out in general elections; specifically those who felt that their vote would not have counted under majority systems. Some may view the idea that multi-member constituencies are a positive factor; something which proportional representation produces. ...read more.

It appears that under a PR system, voters will gain more choice in elections and smaller parties, minority groups and women will gain more seats as PR not only reflects the political representation of an area but also its social representation. It is usually the fairness of the PR electoral systems which is so appealing but the growing pressure to reform the electoral system from membership of the European Union and the newly formed coalition government is becoming more and more eminent. It is doubtful that proportional representation will work efficiently in a Westminster election for a number of reasons. People are used to the traditional 'first past the post' meaning they may prefer to leave it the same, some feel that having too much choice may cause indecisiveness but maybe the biggest disadvantage of a PR electoral system is the fact that it will almost certainly lead to a coalition government. Typically, these types of government are seen as unstable; however, I do believe that in certain areas of the country on a smaller basis, proportional representation can work due to its ability to allow smaller parties closely linked to the specific cultures (Plaid Cymru in Wales). ?? ?? ?? ?? [SOPHIE JAYNE LEWIS] February 17, 2011 ...read more.