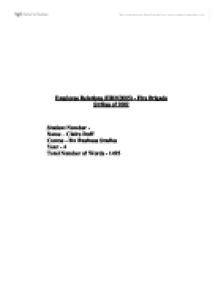 Employee Relations (HRM3005) - Fire Brigade Strikes of 2002 Student Number - Name - Claire Duff Course - BA Business Studies Year - 4 Total Number of Words - 1495 The fireman's wage strikes occurred in the latter part of 2002. A series of forty eight hour and eight day strikes were implemented. The objective of these strikes was to cause disruption to the normal fire cover provided by the fire department thereby making the general public aware of their pay demands. By highlighting their monopoly on fire control and trading on their high standing in the community the union hoped to influence the government's decision to offer the firemen a 40% wage increase. The union representing the firemen were asking for such a substantial increase because they felt that a fire fighters pay had not increased in parity with other essential services pay over the past 25 years. The initial proposal regarding the amount of the service pay of a fireman was submitted back in July 2001. By September 2002 the country was on the verge of facing its first firemen's strike in 25 years, Tony Blair was repeatedly saying that the 40% wage increase was an unrealistic offer. However, Andy Gilcherist the leader of the firemen's union was refusing to consider lowering the percentage increase in wages that was being demanded. Consequently this meant that negotiations were at a stalemate and thereby leaving only one course of action. ...read more.

However it is predicted that in the near future the fire service will suffer the same fate as other public services. This will affect the job security of firemen and as many as 10,000 could be made redundant. The main reason for the reduction in manpower is the increased borrowing by public sector industries, as the government cannot run organisations at a profit loss. If modernisation does occur and 10,000 firemen lose their jobs, it would allow the government to offer a more realistic wage increase. Strike is always the last form of action taken in a given situation. However, a strike is always provocative and well publicised. This can make unsuspecting members of the general public believe that this is the only action that can be taken. However, the firemen would have had dealings with their superiors, trade union representatives and government representatives before a strike was even considered. A fireman's pay is determined by his position and experience. This salary structure is accepted nationally, which means a fireman with the same role and experience will earn the same pay regardless of where he lives. Negotiations between the FBU and National Employers started on the 28th May 2002. A series of six meetings were conducted nationally, however no compromise could be reached, forcing both parties to accept a stalemate after the 6th meeting on September 2nd 2002. A ballot was then taken by members of the fire brigade service and 87% unanimously agreed strike action. ...read more.

The main problem with this approach is that whatever is decided by ACAS is to be accepted by all parties concerned. In conclusion I do believe that the firemen's salary is rather poor considering the type of work they have to carry out. However these men and women had knowledge of the pay structure before they agreed to take the job. I do not believe that essential services should strike as it can put lives and property at risk. This was quite evident in the fire brigades strike in November which helped contribute to the death of a number of people through fire related incidents. Resulting from my research I believe that the firemen's pay should be in line with the rate of inflation but better savings on communications could be and should be achieved. In the Wiltshire area an example of the fire brigade's intransigence can be seen. Local Government want all three emergency service's communications to be conducted under one roof. At present only Ambulance and Police forces are using this facility. Firemen are resisting change and are still insisting on having their own premises for communications. I do think that the firemen should have an appropriate weighting allowance for employees who work in London and the M4 corridor (Reading area). I do believe that a firemen's salary in these areas are not sufficient for affordable housing. This would bring them in line with other public sector workers (Teachers) in the area. ...read more.