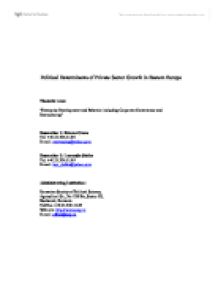 Political Determinants of Private Sector Growth in Eastern Europe Thematic Area: "Enterprise Development and Behavior including Corporate Governance and Restructuring" Researcher 1: Razvan Grecu Tel: +40.21.326.11.85 E-mail: razvanclau@yahoo.com Researcher 2: Laurentiu Stefan Tel: +40.21.326.11.85 E-mail: laur_stefan@yahoo.com Administrating Institution: Romanian Society of Political Science, Agricultiori Str., No 128 Bis, Sector III, Bucharest, Romania Tel/Fax: +40.21.326.11.85 Web site: http://www.srsp.ro E-mail: office@srsp.ro Abstract The research we propose analyzes the impact of political institutions (broader defined) on the growth of private sector in Eastern Europe. While a large amount of scholarly researches focused on the influence of economic policies and indicators on the extension of private sector in Eastern Europe, the political factors that supported or hindered such development have been often neglected. Using a comparative approach and statistical analysis based on linear regression, our research gives account of the impact of such political factors on the development of private enterprises in Eastern Europe. Relevance of the Project Fifteen years after the breakdown of communist regimes in Eastern Europe, we notice important differences on the development of private sectors in countries of Central and Eastern Europe. One major question can be raised about the differences that appeared in this process among countries of the region: What factors can explain this variation? This is a particular important research question because the economic development (but also democratic stability) of the CEE countries is largely dependent of development of private sector, in the context of diminishing state sectors in economy, privatization of state enterprises etc. ...read more.

The novelty of this research resides in this approach. While there is a vast literature on economical determinants of private sector growth, less attention has been paid to the influence of political factors to development of private sector. There are at least two major reasons why we should focus on such relationships. The first one is that in Eastern Europe the economic development is associated to the development of private sector, due to systemic changes that happened after 1989. All over Eastern Europe, economic prosperity is the result of the private sector expansion associated with the withdrawal of the state from the economy. The second reason derives from the first one: if economic prosperity is to be happened in Eastern Europe due to private sector expansion in the economy, then factors that affect its development (others than economic factors) are also becoming very important. Hypotheses: In order to reach the research goals, we developed some specific hypotheses that will be tested. The first ones point to a possible relationship between democracy and individual freedom, on the one hand, and expansion of private sector in the new democracies, on the other hand. Our assumption is based on the fact that countries with higher levels of democratic performance and individual freedom (including economic freedom) develop more dynamic and effective institutions than countries that are not fully democratic polities or where individual rights and freedoms are not secured by effective laws. ...read more.

8. Since we have no instrument to measure political and administrative corruption per se, we shall use the perception of corruption as an indicator of level of corruption in a particular state. In order to test the last of our hypotheses, we shall use the Transparency International index of corruption in order to operationalize this variable. We shall use a comparative approach in order to test our hypotheses. The cases that will be the focus of our endeavor are the former communist countries of Central and Eastern Europe, including the former Soviet Republics that became independent states after the fall of Soviet Union. In order to increase the empirical evidence, the cases will be one respective country per year, starting from 1990 (for former communist states) or from the year they gained the independence (ex-Soviet countries and former republics of Yugoslavia). Most of the data on the variables we focus on is already available for research from different international institutions (World Bank, Freedom House, Heritage Foundation), while others can be easily computed, using information from national institutes, electoral results. In this respect, it should be no difficulty to collect all this data. In order to analyze the data and to test the research hypotheses, we shall use linear regression analysis that will examine the impact of independent variables (such as degree of political and economic freedom, the political support for governing parties, a parliamentary institutional settings etc) on the dependent variable (the level of private sector share). ...read more.