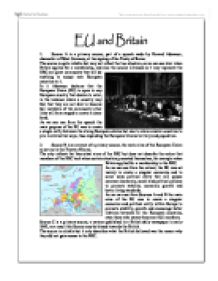 EU and Britain - the treaty of Rome, source related study.

1. Source A is a primary source; part of a speech made by Konrad Adenauer, chancellor of West Germany, at the signing of the Treaty of Rome. The source is quite reliable but may not reflect the true situation, as we can see later when Britain applies for a membership, and also the source is biased as it may represent the EEC as a great community that will do anything to accept new European countries to it. In it Adenauer declares that the European Union (EU) is open to any European country that desires to enter, in the instance where a country may feel that they are not able to become full members of the community other links will be arranged to create a closer bond. As we can see from the speech the main purpose of the EU was to create a single entity between the strong European estates but also to allow smaller countries to join in alternative ways, thus expanding the European Unions territory and population. 2. Source B is an extract of a primary source, the main aims of the European Union as set out in the Treaty of Rome. The only reflects the theoretical aims of the EEC but does not describe the action that members of the EEC took when certain situation presented themselves, for example when Britain applied for a membership in the EEC. ...read more.

De Gaulle also argued that Britain is an island and doesn't form part of main land Europe, thus relying more on water and air based trading to reach the many colonies and former-colonies that form the common-wealth. Overall De Gaulle claims that Britain as always tried to be a separate body and has always relied on colonies and links with countries far away from Europe. Source E is a primary Source; a cartoon published In a British newspaper in early 1963, as the source was taken from a British newspaper it may be biased. The source is pretty reliable in describing what the British believed was the reason for them not being able to gain a membership in the EEC. In the cartoon we can see de Gaulle and Adenauer in football uniforms and Harold Macmillan in a cricket uniform standing at the door, beside him the list of rules in the European football club. This cartoon shows us that the British believed that their application for the EU was vetoed because Macmillan wanted special terms which did not form part of the Treaty of Rome; therefore they are not allowed to join the game. Source D and E tell us different reasons for refusing Britain's application, one of them ,expressed in Source D by De Gaulle, is that Britain relied mainly on is colonies and other European countries that did not belong to the EU, De Gaulle also claims that Britain attempted to create a separate European trading union, known as EFTA. ...read more.

De Gaulle argued that Britain was a burden for the EEC; economically Britain was at a worse position then the European Community and De Gaulle said that it will only drag down the community as we can see from Source H. He also argued that Britain was too reliable on the common wealth and it was never really a part of Europe as we can see in Source D. US influence over Britain scared De Gaulle who feared US involvement in European affairs, as we can see from Source C, which presents the De Gaulle as a policeman preventing the Britain from joining the US. Many members within the EEC wanted Britain to join, by doing so the EEC will gain political strength and population size, and so they will be able to achieve their goals sooner without much control from the British government. One of these issues was the vast amounts of pollution that originated from Europe and the only way to address them was at a continental scale. At the time Britain was one of the largest polluters in the European continent, so the EEC was forced to have some influence on the British government to address this issue. As we can see De Gaulle did represent an obstacle for a British membership but we cannot negate the changes that occurred in Britain between the first two vetoed application and their acceptance to the EEC. Jacobo Blanco ...read more.