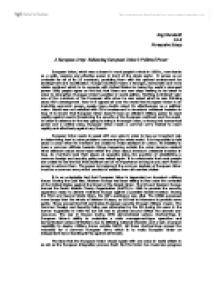 Ezgi Bereketli L9-6 Persuasive Essay A European Army: Enhancing European Union's Political Power European Union, which was a dream in most people's minds in 1950's, now stands as a solid, resolute and effective power in front of the whole world. It serves as an umbrella for all of its 25 members, providing them with the optimal environment for development and reunification. Europe reunited means a stronger, democratic and more stable continent which is to compete with United States for being the world's strongest power. Still, people agree on the fact that there are new steps waiting to be taken in order to strengthen European Union's position in world politics. 'Nothing is finished' said one of the members of the European elite when he was asked what he was thinking about EU's development. Even it is agreed all over the world that European Union is an invincible economic power, people have doubts about its effectiveness as a political union. World was not satisfied with EU's involvement in America's unilateral invasion in Iraq. It is known that European Union doesn't have an efficient military power to react rapidly against events threatening the security of the European continent and the world. In order to advance in the way going to being a thorough union, a strong and economical power and a unified voice, European Union needs a common army trained to react rapidly and effectively against any threats. ...read more.

All these shortcomings proved the necessity for a common European Army which is to make European Union an independent force standing firmly against all threats. The idea that the European Union should speak with one voice in world affairs is as old as the European integration process itself. But the Union has made less progress in forging a common foreign and security policy over the years than in creating a single market and a single currency. The first step was taken as the European Defense Community was established in 1954 followed in 1970 by a process called European Political Cooperation, whereby EU member countries tried to coordinate their positions on foreign policy issues of the day. As the union enlarged reaching a population of 15 and to 25 member states, it was agreed that a more effective policy was needed. The principle of a common foreign and security policy (CFSP) was formalized in the Maastricht treaty of 1992. As part of the CFSP, the Union also created a European Security and Defense Policy (ESDP) with the potential, if agreed later on, for creating a common defense structure. In December 2003, EU leaders adopted a European Security Strategy and have since agreed on its basic mission and priority areas for action: the fight against terror; a Middle East strategy; a comprehensive policy on Bosnia-Herzegovina. ...read more.

If the soldiers receive the same training, than it becomes easier for them to be unified in a common army. New standards must be adopted standardizing the military training and they must be implemented carefully. The third and the last step is the creation of the common army by choosing adept soldiers after a careful evaluation. The number of the soldiers from each country must be decided according to the minimum number which is to be proportional to the country's population. As we are living in an era in which every mind is preoccupied with the question of international terrorism threats, the importance of being a firm political union is undeniable for the European Union. After the unpleasant experiences of the war of the Kosovo, the Cold War and the Iraq invasion, it became prominent that European Union is in a dire need of a common army to implement the decisions made by its common voice. If it is ensured that the concept of European identity is understood by all people and the military training is standardized, than there won't be any obstacles in front of the creation of the European common army. The dream of a unified Europe came true in fifty years and European Union now stands as an effective economic power. To carry its power into the political platform, the union must have a common foreign and security policy and a common army to enforce its decisions. ...read more.