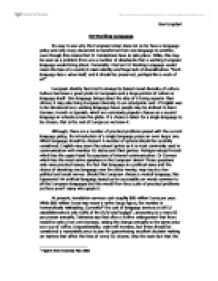 EU Working Language Its easy to see why the European Union does not so far have a language policy and why every document is transferred from one language to another, even though this means that 21 translations have to take place. While, this may be seen as a problem there are a number of drawbacks that a working European language would bring about. Personally I feel an EU Working Language would mean the loss of a country's main identity and huge lack of diversification. "Each language has a value itself, and it should be preserved, perhaps like a work of art" European identity has tried to always be based round diversity of culture. Culture has been a great pride to Europeans and a large portion of culture is language itself. ...read more.

Or German which has the most native speakers in the European Union? These questions only raise practical issues, the fact that language is a political issue and the choice of elevating one language over the other twenty, may touch a few political and social nerves. Should the European choose a neutral language, like Esperanto? An artificial language based as far as possible on words common to all the European languages but this would then face a pile of practical problems as there aren't many who speak it. At present, translation services cost roughly 800 million Euros per year. While 800 million Euros may seem a rather large figure, the number is tremendously misleading. Currently* the cost of language services at all EU establishments is only 0.8% of the EU's total budget1, amounting to a mere �2 per person annually. ...read more.

This and other similar measures have increased productivity by a massive 40%. Major advances in computer aided translation have also allowed swifter translations and reduced delays, without question newer and furthermore advanced computers will become more available in the not so distant future. Finally, introducing one language would not bring people together, its more likely to divide even more. Besides, a more important principle of the EU is its democracy. Having struggled to tackle the accusations of democratic insufficiency ever since it existence began in 1992. The European Union would be foolish to be seen further restricting democracy within the institutions. The problem could prove to be the closing stages in the EU Parliament where MPs are elected due to political constituency not because of their language skills. On the whole I feel an EU working language would be a catastrophic disaster. Languages are essential to peoples and nations. Language is deep-rooted to identity, culture, and memory. Language erosion is cultural genocide. ...read more.