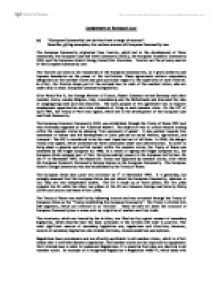 (b) The English legal system can no longer be considered on its own, but has to be understood within the context of its institutions. What are the institutions referred to and what is their impact on the English Legal System. When the Treaty of Rome (1957) was amended by the Single European Act in 1986, it allowed privileges, such as freedom of movement for workers, however, at the same time the member states assigned part of their 'decision-making' powers over to the European Institutions. The decision making institutions of the European Union comprise of; the Council of Ministers, European Commission, European Parliament and the European Court of Justice. The Council of Ministers is the main legislative body and is made up of ministers who represent and operate in the interest of their state. Although the Council is made up of 15 members, there are other members who are assigned to represent their state in different fields, such as agriculture, social affairs and transport. The Council is responsible for addressing and concluding important issues, which mainly concern proposals made from the European Commission. As well as making decisions, they are also responsible for issuing regulations and directives. They represent the interests of many national governments, however, since the effect of the Maastricht Treaty, the European Parliament now has an active part in the 'law making process'. ...read more.

of the European Communities Act (1972), judges are able to overcome any inconsistencies within English law through interpretation. Section 2(4) provides that UK legislation takes effect subject to EU law but with the exception of the European Communities Act itself, therefore judges tend to refer to this act when trying to prevail over EU law. However, if the courts are unable to use the Act to their advantage then they must allow EU law to prevail. The Court of Appeal referred the case of Macarthys Ltd v Smith (1979) to the European Court of Justice, as it was argued by Smith that her employers had been in breech of the Equal Pay Act. The court of justice ruled that they were in breach of Treaty Article relating to equal pay. Lord Denning provided: [that if Parliament] 'deliberately passes an Act' contrary to the EC Treaties, it would be the duty of the UK courts to follow the Act' "In construing our statute, we are entitled to look to the Treaty as an aid to its construction, and even more, not only as an aid but as an overriding force. If...our legislation is deficient - or inconsistent with Community law...then it is our bounden duty to give priority to Community law." Although British Parliament retains the power to reassert its sovereignty it would inevitably mean giving up their EU membership, which is quite unlikely. ...read more.