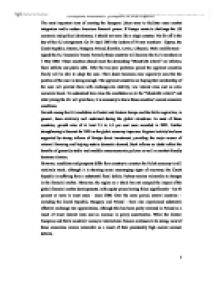 European economies' prospects of convergence. The most important aims of creating the European Union were to facilitate more market integration and to reduce American financial power. If Europe wants to challenge the US economic and political dominance, it should act more like a single country. Not far off is the day of the EU enlargement. On 16 April 2003 the leaders of 10 new members - Cyprus, the Czech Republic, Estonia, Hungary, Poland, Slovakia, Latvia, Lithuania, Malta and Slovenia - signed the EU Accession Treaty. Formally these countries will become the EU's members on 1 May 2004. These countries should meet the demanding "Maastricht criteria" on inflation, fiscal deficits and public debt. After the two-year probation period the applicant countries finally will be able to adopt the euro. Their desire becomes clear especially now that the position of the euro is strong enough. The applicant countries are hoping that membership of the euro will provide them with exchange-rate stability, low interest rates and an extra economic boost. ...read more.

Moreover, the region as a whole has not escaped the impact of the global financial market developments, with equity prices having fallen significantly - by 50 percent or more in most cases - since 2000. Over the same period, several countries - including the Czech Republic, Hungary, and Poland - have also experienced substantial effective exchange rate appreciations, although this has been partly reversed in Poland as a result of lower interest rates and an increase in policy uncertainties. While the Central European and Baltic countries' access to international finance continues to be strong, most of these economies remain vulnerable as a result of their persistently high current account deficits. The applicant countries hope that getting into the EU and consequently the monetary union will immediately produce an unprecedented economic boost. They hope that investors will no longer treat them as "emerging markets" with all the implied risks of corruption and ramshackle administration. ...read more.

Adopting the EU regulations - particularly in the social and environmental fields - may prove burdensome for the new members and increase their costs. Once the applicant countries are in, they become less competitive because they have to keep to social and environmental standards of Western Europe. Besides, the question arises as to whether the applicant countries will be able to live with the tight fiscal controls, such as limitation of budget deficits to 3% of GDP, and whether their banking systems will be able to stand them. So, the European Union enlargement process will start in the near future. However, there will be an income gap among Central/East Europe and West Europe, which would amount on average to 30 years. Different countries would converge at different speeds. It might take Slovenia only ten years to catch up whereas Romania might face a 600-year haul. Within Europe the pull toward the European Union and the euro zone might eventually prove irresistible. Only in Britain, the European Union and the monetary union are viewed as permanently separable things. 1 ...read more.