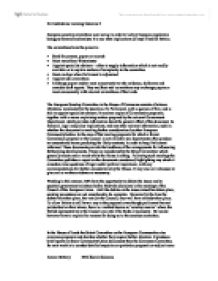 European scrutiny committees were set up in order to look at European legislation being put forward and analyse it to see what implications (if any) it had for Britain. The committees have the power to * Send for persons, papers or records * Meet away from Westminster * Appoint specialist advisors - either to supply information which is not readily available or to explain matters of complexity to the committee * Meet on days when Parliament is adjourned * Appoint sub-committees * Exchange papers and/or meet concurrently to take evidence, deliberate and consider draft reports. They and their sub-committees may exchange papers or meet concurrently with relevant committees of the Lords The European Scrutiny Committee in the House of Commons consists of sixteen Members, nominated for the duration of a Parliament, with a quorum of five, and is able to appoint specialist advisers. It receives copies of Commission proposals, together with a memo explaining matters prepared by the relevant Government Department, which provides information about the general effect of the document, its financial, legal and policy implications, and any other relevant information, such as whether the document is awaiting further consideration by other European Community bodies. In the case of fast moving proposals for which a formal Commission proposal to the Council is not available yet, departments often produce an unnumbered memo predicting the likely contents, in order to keep Parliament informed. ...read more.

This is done by Supplementary Explanatory Memoranda, which are also considered by the Commons and Lords Committees. At the beginning of every parliamentary session within the House of Lords the committee for the scrutiny of European legislation is appointed. The chairman of the committee is known as the Principal Deputy Chairman of Committees and receives a salary. Around 20 members make up this main committee although each of the members also serves on the sub-committees set up to allow the committee to conduct investigations. Approximately 70 lords are involved in the work of either the main committee or that of one of the sub-committees. The sub committees consist of: * Economic and Financial Affairs, Trade and External relations (A) * Energy, Industry and Transport (B) * Common, Foreign and Security Policy(C) * Environment, Agriculture, Public Health and Consumer Protection (D) * Law and Institutions (E) * Social Affairs, Education and Home Affairs (F) The Treaty of Nice sets out recommendations for the future structure of the European Union. The Commission Since its origins, the Commission has consisted of two nationals from each of the larger member states and one from each of the smaller member states. With negotiations going with twelve applicant countries who could also be joined by others in the near future. With twenty-eight member states in the European Union could have meant as many as thirty-five commissioners if the system hadn't been changed. ...read more.

preliminary rulings For the Court of Justice - * The power to rule on disputes concerning intellectual property * The number of judges to be in line with the number of Member states * Through the Council, the rules of procedure for both courts to require a qualified majority rather than that of unanimity The European Parliament The present number of members is 626. The Amsterdam Treaty in 1997 placed an upper limit of 700 on the number of members of the European Parliament. With the continuing enlargement of the European Union, the number of members (of Parliament) will soon be well over 700, which has the serious potential of undermining the effectiveness of Parliament. To ratify this situation, the distribution of seats between the member states has been revised (whilst still staying in accordance with the principle of 'appropriate representation of the peoples'. Through the Treaty of Nice the upper limit was changed from 700 to a ceiling of 732. For the parliamentary term of 2004 - 2009, after the allocation and distribution of seats to the current member states and those who have signed the accession treaty by January 1st 2004, the number of members will (provisionally) be increased proportionally for each Member State (up to the ceiling of 732). Any countries who join the European Union during this parliamentary term will also be able to elect their members, so, in this case, the ceiling may be temporarily exceeded. ...read more.