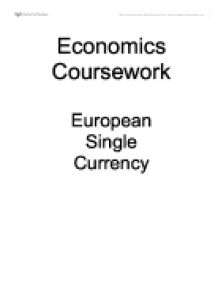 Economics Coursework European Single Currency By Sheryar Majid Contents Page Page 1 Cover Page 2 Contents Page 3 Introduction Page 4 Aim, Method (Page1) Page 5 Method (Page2) Page 6 and 7 Hypothesis Page 8 and 9 Pros and Cons of the Euro for Vodafone UK Page 10 and 11 What will the affects of Britain joining the euro be on Vodafone UK? Page 12 Questionnaire Page 13 and 14 EMU theory Page 15 Conclusion Page 16 Evaluation Page 17 Bibliography How the single monetary system and the Euro will affect UK businesses and Vodafone UK in particular: The Euro is the new single currency for Europe. This currency came into affect on 1 January 1999, from the fixing of conversion rates of eleven national currencies. These eleven countries will replace their national currencies with the Euro. A single currency will therefore need a single Bank, hence the ECB, the European Central Bank. The ECB located in Germany has the responsibility for providing and managing the Euro and take decisions on the level of interest rates. All together there will be 11 countries joining the Euro from a possible 15, the four nations not joining will be the UK, Sweden, Denmark and Greece. These countries have each claimed that they want to wait until economic conditions are right before joining the Euro. However the countries joining the Euro will be Germany, France, Italy, Spain, The Netherlands, Republic of Ireland, Finland, Austria, Belgium, Portugal and Luxemburg. Even though Britain may not have joined the Euro they are still eligible to join but that wont happen until at least 2004, but one thing is for certain join or not join the Euro will still affect us all, especially businesses in the UK. The company I am investigating the affect of Britain joining the EMU are Vodafone Airtouch PLC, I contacted their company in the UK Vodafone UK to ask them the affects of the Euro on their business, Vodafone Airtouch PLC is in business in ...read more.

Britain are waiting for un till the Euro matures and becomes more stable then it promises prosperity and unity. But this is wrong as by the time the Euro has reached its high point Britain will be left back to much and it will be a long and big up hill battle which Vodafone UK just cannot wait for so they will move out and so will others and so the UK will be in crisis and therefore Britain not joining would be very dangerous. Currently joining the single currency would mean a chance of lower inflation, price transparency which is good for customers and Vodafone UK, a decrease in unemployment and many others factors. For now the pros out weigh the cons. This means for Vodafone UK Britain joining the single currency would be not only crucial for them but also for Britain itself as both would lose out if they did not join, so this coincides with my hypothesis, as it was correct. Evaluation Overall I feel that the coursework went well, I worked efficiently and to my maximum ability for the time that I had. I was able to gather a more than sufficient amount of useful information from a wide variety of sources. In my opinion I could have bettered this coursework by getting some statistics together and creating some graphs or tables. I could have tried looking for them on the Internet, I did look for some more graphs but I couldn't find any. Even though I have included a couple of tables and graphs, I don't think that there were many opportunities in this coursework to include graphs, because most of this coursework was writing. My time management has been very good for this course work I think could have spread this coursework out a bit more tough in terms of less research and more writing. For the first month I left the writing alone and did only research with notes on relevant extracts. I think that if my time was managed better I could have done this course to far greater standard. ...read more.