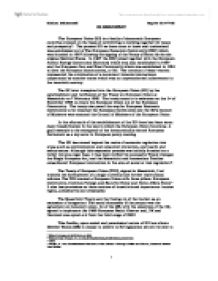 The obligation to ignore conflicting national law was demonstrated more pointedly in Factortame [1990].19 'A group of Spanish fishermen brought a claim before the English courts for an interim injunction to prevent the application of certain sections of the Merchant Shipping Act20, which denied them the right to register their boats in the UK, and which the claimants alleged were in breach of EC law'21. The ECJ held that an injunction should be granted to give effect to rights under EC law. UK courts have treated the The European Communities Act22 as a permission by Parliament to apply Community law. Under the doctrine of Parliamentary Supremacy, any statute passed after the European Communities Act23 will prevail over it. Lord Denning in Macarthys Ltd v Smith [1980]24 made it clear that if Parliament were expressly to attempt to repudiate its EU obligations our courts would be obliged to give effect to Parliament's wishes. This is known as the possibility of express repeal. Whilst this is unlikely to happen as long as we remain members of the EU, it is a theoretical possibility and the principle of Parliamentary Sovereignty remains intact. 'However, this, still does not enlighten us enough as to what EU law is. A way of answering would be by saying what EU law is not: it is not simply domestic, nor simply international law, it is not simply economic, nor simply social law, it is not simply substantial, nor simply procedural law'25. ...read more.

Some see the Constitution as a missed opportunity to build a United States of Europe, while others complain it does precisely that. Much depends on how it is implemented. For example, the European Council president could become a new force for EU integration - or just a figurehead. Equally, the impact of the Charter of Fundamental Rights may hinge on rulings by the European Court of Justice. 'In short, the EU can only be defined by itself, its processes and its goals in a paradoxical and not always easy to comprehend manner. It is a unique political, economic, social, geographical and juridical organisation whose definition remains elusive and indeterminate'31. Such indeterminacy may be perceived as a negative thing. Ultimately, 'Indeed, it may indicate lack of unity, fragmentation and disaccord. However, it may also indicate tolerance, allowance for difference, respect to the locality or the particular. The latter have found expression in what is called 'flexible or differentiated integration', which essentially means that while economic, political and social integration remains an ideal, it must not be perceived in an absolute manner that would lead to a uniform federal organisation, but in a flexible and particularised manner that will allow for divergences and differences in opinions and actions. This is especially relevant in an organisation where unanimity or even substantial consensus is difficult to reach because of the plurality of culture'32. ...read more.