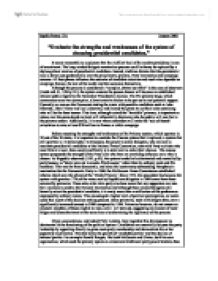 Evaluate the strengths and weaknesses of the system of choosing presidential candidates.

Sophie Pearce 13A January 2003 "Evaluate the strengths and weaknesses of the system of choosing presidential candidates." It seems reasonable to conjecture that the Achilles' heel of the modern presidency is one of recruitment. The long-winded delegate nomination process could in theory be replaced by a daylong direct election of presidential candidates. Instead, tradition dictates that the presidential race is drawn out quadrennially over the pre-primary, primary, Party Convention and campaign seasons. All four phases influence the outcome of candidate selection and much also depends on campaign finance, the role of the media and the nominees themselves. Although the process is considered a "complex, drawn-out affair" in the eyes of observers (Janda and Al, 1994 p191), the system ensures the person chosen will become an established national public figure by the November Presidential election. The Pre-primary stage, which commences some two years prior, allows tentative feelers to be put out to test potential support. Currently we can see the Democrats testing the water with possible candidates such as John Edwards, John.F.Kerry and Joe Lieberman, and already the press are on their cases surmising who will be the front runner. This time, although coined the "Invisible" primary, is important as whom ever the press decide to back will influentially determine who the public will vote for in the primary season. ...read more.

The results of Super Tuesday can also make or break a candidate as in 2000 it handed the Democrat nomination to Al Gore and broke the candidacy of James Bradley. As the results are all but a foregone conclusion, the upcoming primaries seem fruitless. In addition, the majority of these 21 states are southern which invariably favours southern candidates. Bill Clinton from Arkansas confirmed this in 1992 when he won practically all the nominations available. As a state, California is a vital primary to win as the state sends 20% of all delegates to both parties' conventions. The weakness of the National convention (in that the outcome is relatively preconceived) can be attributed to the strength of the primary system and in particular "front-loading". The selection of presidential candidates is really just a formal rubber stamp of state-primary decisions. It does however have its strengths and important functions. At the Convention the candidate's political platform is chosen and approved by the delegates and the party's congressional representatives. Effectively it is a unifying event, harmonizing any conflict that surrounded primary contests. Jesse Jackson, a former Democratic candidate, embodied this cohesion when he made impassioned speeches to unite the party behind his rivals, Mondale in 1984 and Dukakis in 1988. ...read more.

Although it considerably increased the even-handedness of candidacy by limiting contributions and campaign spending, it did not foresee the corruption of "Soft money." Rather than fund voter registration, much of it goes towards candidates campaigns, which is significant considering "soft money" was said to total $250 million in 1992. Since Bush's scandalous first term with Enron and supposed oil-tycoon donations, many became disillusioned with the inextricable link between electioneering and money. In response, former Presidential candidate in 2000, John McCain, with fellow congressman Russ Feingold, pushed Campaign finance reform through congress with the Russ-Feingold Bill, which limited the advertising and 'soft money' of Political Action Committees (PACs). Finance however is still the fatal flaw in the electoral system of choosing presidential candidates. Bush can only attest this: with a larger "war-chest" than McCain he had an overwhelming advantage. One can therefore conclude that the presidential candidate selection process is far from ideal. Governed by money, media and spin, as opposed to substance does mitigate against the intended democratic nature of an electoral process. Reforms, however, have shown an increasing respect for democracy, by giving the electorate greater power at the demise of party bureaucracies. The politics of entrepreneurship that suffuses US elections is integral to the philosophy of the American dream, thus the notion that the highest office in the land is bestowed to the greatest entrepreneur seems quite apt. ...read more.