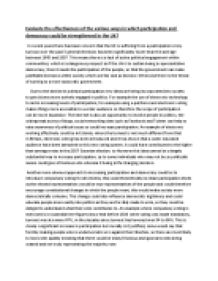 Evaluate the various ways in which participation and democracy can be strengthened in the UK?

﻿Evaluate the effectiveness of the various ways in which participation and democracy could be strengthened in the UK? In recent years there has been concern that the UK is suffering from a participation crisis, turnout over the past 3 general elections has been significantly lower than the average between 1945 and 1997. This means there is a lack of active political engagement within communities, which is a dangerous prospect as if the Uk is to sustain being a representative democracy, then it needs the participation of the people, so that the government can make justifiable decisions within society which are fair and as decisive. Otherwise there is the threat of turning to a more autocratic government. Due to the decline in political participation new ideas are being incorporated into society to get citizens more actively engaged in politics. ...read more.

Another more obvious approach to increasing participation and democracy could be to introduce compulsory voting for all citizens; this could theoretically increase participation levels as the elected representatives would be true representatives of the people and could therefore encourage constitutional changes in which the people want, this would make society more democratically cohesive. This change could also influence democratic legitimacy and could educate people more vastly into politics as they are forcibly made to vote, so they could be obliged to understand what their vote contributes to. An example where compulsory voting is exercised is in Australia here figures show that before 1924 when voting was made mandatory, turnout was at a mere 47%, in the decades since turnout has hovered over 94 to 96%. This is clearly a significant increase in participation but morally is it justified; some would say that forcibly making people vote is undemocratic so is against ...read more.

So it could be a pointless venture and lead to as some would call ?donkey votes? being distributed. An example of a country which adopted the voting at 16 would be Austria. In 2007 Austria became the first country in the EU to adopt this policy and thus so far there are no sufficient figures to suggest that it improves participation consistently, but we can?t rule out that to the minority groups of politically educated that this change would be a beneficial prospect. Overall the suggestions made do show promising opportunities for increasing participation and democracy within the UK, although some suggestions may not be widely accepted because of their implications controversially by certain political parties, it may be difficult to pass such legislation as their needs to be a definite result. The lasting appeals of these suggestions seem to be beneficial to society and do not hinder the public voice but rather make it stronger and more lucrative for the future. ...read more.