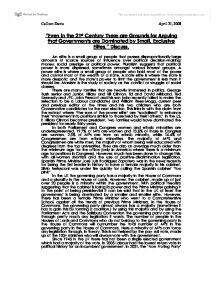 "Even in the 21st Century There are Grounds for Arguing that Governments are Dominated by Small, Exclusive Elites." Discuss. An elite is a small group of people that posses disproportionally large amounts of scarce sources of influence over political decision-making: money, social prestige or political power. Pluralism suggests that political power is more dispersed, sometimes amongst various interest groups. A power elite is where a small group of people who hold most of the power and control most of the wealth of a state. A state elite is where the state is more despotic and the state's power to limit the government is less than it should be. Marxism is the study of society as the conflict or struggle of social classes. There are many families that are heavily immersed in politics. George Bush senior and Junior, Hillary and Bill Clinton, Ed and David Miliband, Ted Kennedy and JFK, John Prescott and his son (who recently failed to make the selection to be a Labour candidate) and William Rees-Mogg, current peer and previous editor of the times and his two children who are both Conservative candidates for the next election. ...read more.

In 1998, 66.5% of civil service members had arts degrees; 43.5% were from Oxbridge and 50% from public schools. However, within the civil service significant improvements have been made. A report from the late 1960's claimed that 85% of the mandarins (a class of civil servant) were from a middle-class background, 71% had arts degrees, mainly in history and classics; and 73% were from Oxbridge. Overall, it seems that certain groups in society are over-represented in government, whether it be in local/state government through to national government. However, over the past fifty years this has massively improved. This are still improving and it will take time. Berlusconi's response to the Spanish cabinet that views that may be considered undesirable are still around and it will take time for those to disappear. The Spanish cabinet however also proved that these kinds of views are becoming less and less prevalent. In both Parliament and Congress there are record numbers of women and people from ethnic minorities. Is making Congress and Parliament more representative actually making things better? In the House of Lords the remaining hereditary peers turn out more regularly to votes and debates than many of the new peers replacing hereditary peers in order to make the House of Lords more representative. ?? ?? ?? ?? Callum Davis April 21, 2008 ...read more.