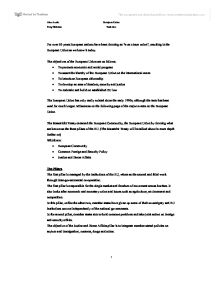 For over 50 years European nations have been forming an "ever closer union", resulting in the European Union as we know it today. The objectives of the European Union are as follows: * To promote economic and social progress * To assert the identity of the European Union on the international scene * To introduce European citizenship * To develop an area of freedom, security and justice * To maintain and build on established EU law The European Union has only really existed since the early 1990s, although the term has been used for much longer. Milestones on the following page of the major events on the European Union. The Maastricht Treaty renamed the European Community, the European Union by forming what are known as the three pillars of the EU. (The Maastrict Treaty will be talked about in more depth further on) Which are: * European Community * Common Foreign and Security Policy * Justice and Home Affairs The Pillars The first pillar is managed by the institutions of the EU, where as the second and third work through inter-governmental co-operation. The first pillar is responsible for the single market and freedom of movement across borders. It also looks after economic and monetary union and issues such as agriculture, environment and competition. In this pillar, unlike the other two, member states have given up some of their sovereignty and EU institutions can act independently of the national governments. In the second pillar, member states aim to hold common positions and take joint action on foreign and security affairs. The objective of the Justice and Home Affairs pillar is to integrate member states' policies on asylum and immigration, customs, drugs and crime. The major events which have happened during the era of the European Union are as follows; 1948: Plans for a peaceful Europe After the Second World War, Europe looked for ways to prevent another war. ...read more.

European Commission The Commission is the EU's civil service, made up of 20 commissioners and a subsidiary staff of about 27,000, making it the biggest of the European institutions. The Commission's main job is to initiate new policy measures. After consultation with interest groups and experts, it proposes legislation to the Council of Ministers and the European Parliament who then decide on it. Once legislation is passed, the Commission is responsible for implementing it. It also acts as the guardian of the EU treaties to ensure that EU legislation is applied correctly by the member states. If necessary, it can institute legal proceedings against member states or businesses that fail to comply with European law and, as a last resort, bring them before the European Court of Justice. Commissioners are accountable to the European Parliament, which is the only body with the power to sack them. The commissioners come from all 15 member states, but have to promise to follow the interests of the EU, not their own country. Each has responsibility for a policy area e.g. enlargement, agriculture etc. At present the big countries have two commissioners and the smaller countries only one. But this will change with enlargement. Council of Europe The Council of Europe is a body of more than 40 countries that aims to promote democracy and protect human rights. It is a separate institution from the European Union, but the 15 member states and all the candidate countries are members. Based in Strasbourg, it was established in 1949 as a discussion forum for all European countries and concentrates mainly on cultural, environmental and ethical issues. The Council makes recommendations and forms opinions but does not have any legislative power. The convention has had considerable influence over the formation of EU legislation. Paris Treaty The Paris Treaty set up the European Coal and Steel Community - the first of the European communities which would ultimately result in the European Union. ...read more.

Qualified majority voting The Council of Ministers has two ways of taking decisions - unanimity, when everyone has to be in agreement - and qualified majority voting - a system of weighted votes. QMV is the most common method of decision-making, used in all but the most sensitive issues. Issues which are decided on by QMV are also voted on by the European Parliament. This means that the council and parliament act together in co-decision. Under QMV, each member state is given a certain number of votes in the council, weighted according to its size and population. For example, Germany, the EU's largest state, has 10 votes, while Portugal has five and Finland three. At present, there are 87 votes in the council, distributed between the 15 member states. The qualified majority means that 62 votes are needed to pass a proposal, rather than the normal majority of 44. The reason for the qualified majority, rather than a simple 50%, means that at least half the population of the EU and half the member states must be in favour of a motion to pass it. But with enlargement, the balance between big and small countries will change. If the distribution of votes remained the same, a group of small countries could in effect gang up against the big countries and vote them down, even though the small countries together represent fewer people than the big ones. Some of the longest and hardest negotiations at the 2000 Nice summit were dedicated to working out how many votes each country should have in the future to avoid this situation. The Nice Treaty allocates the 12 candidate countries their votes and adjusts the votes of the current member states. Once all the countries have joined, there will be 345 votes in total. To reach a qualified majority 255 votes will be required, as well as a majority of member states. As an added control, the votes cast will have to represent 62% of the EU population. ?? ?? ?? ?? Alex Austin European Union Tony Hickman Task One 1 ...read more.