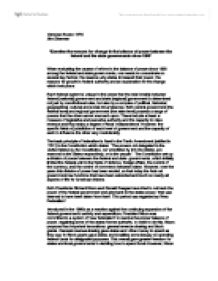 Vanessa Bowen 13FA Mrs Sharman 'Examine the reasons for change in the balance of power between the federal and the state governments since 1980' When evaluating the causes of reform in the balance of power since 1980 among the federal and state governments, one needs to concentrate on several key factors: the reasons why states increased their power, the reasons for growth in federal authority and an explanation for the change which took place. Each federal system is unique in the sense that the relationship between federal [national] government and state [regional] government is determined not just by constitutional rules, but also by a complex of political, historical, geographical, cultural and social circumstances. Both central government [the federal level] and regional government [the state level] possess a range of powers that the other cannot encroach upon. These include at least a measure of legislative and executive authority and the capacity to raise revenue and thus enjoy a degree of fiscal independence. However, the specific fields of jurisdiction of each level of government and the capacity of each to influence the other vary considerably. The basic principle of federalism is fixed in the Tenth Amendment [ratified in 1791] to the Constitution which states: 'The powers not delegated to the United States by the Constitution, nor prohibited by it to the States, are reserved to the States respectively, or to the people'. ...read more.

As State governments were forced to rely on their own sources of income, so they rediscovered their autonomy. State policies became more creative. Innovations extended to important social issues such as welfare reform and education. Some referred to the 'renaissance of the states' as they again became 'laboratories of democracy'. This caused much irritation. Critics felt the state's action had compromised both America's internal market and Washington's control of foreign policy, two traditional functions of the national government. There were limitations to Reagan's programme. The swaps and devolution of programmes to the states were abandoned. The programme was met with hostility from Congress and overall 'The impression was created that federalism was nothing more than a code word for stringent expenditure cuts'. Overall, Reagan was unable to win sufficient support. In the 1990s, the Federal government continued to exercise more power over more aspects, 'Coercive federalism'. The Supreme Court made a number of significant rulings. Although the Garcia versus San Antonio Metropolitan Transit Authority ruling [1985] enhanced the powers of the federal government, recent court rulings, for example the availability of abortion, have reinforced the position of the individual states. In November 1994, the Republicans won control of both houses of Congress in the mid-term elections with a commitment to reshape federal relationships and devolve power back to the states. ...read more.

The federal government often only sets minimum standards, for example environmental protection. The federal system retains some dualism, as originally envisaged in the USA. It meant that the national and state governments in a federation retained separate spheres of action. Each level independently performs the tasks allocated to it by the constitution, for example, the banking system and that of the tax system. In reality, the main feature of contemporary federations is interdependence rather than independence of levels. Overall, Kincaid argues that both federal and state government have become strong and modern governments. It seems that overall, the developments which have occurred may provide a basis for the beginnings of what Thomas R. Dye calls 'competitive federalism', in which federal, state and local governments would compete with each other to provide the services that citizens demand. Federalism is still a potent force in America and it continues to draw its vigour from the desire at a political level to decentralise political power. President George W Bush has promised to continue with what might be deemed a republican principle-making Federal government smaller. Though some political scientists argue that in the future it is possible that power will begin to return to Washington DC. For example, the events of the 11th of September have almost certainly enhanced the powers of the President and the executive branch of the government. ...read more.