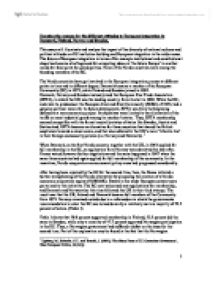 Examine the reasons for the different attitudes to European integration in Denmark, Finland, Norway and Sweden.

Examine the reasons for the different attitudes to European integration in Denmark, Finland, Norway and Sweden. This essay will illuminate and analyse the impact of the diversity of national cultures and political attitudes on EU institution building and European integration in the wider sense. The future of European integration in terms of for example institutional and constitutional shape has become a battleground for competing ideas on 'the future Europe' in another words for focal point for grand politics. None of the Nordic countries were among the founding members of the EC. The Nordic countries have got involved in the European integration process at different points in time and to different degree. Denmark became a member of the European Community (EC) in 1973, while Finland and Sweden joined in 1995. Denmark, Norway and Sweden instead joined the European Free Trade Association (EFTA), in which the UK was the leading country, from its start in 1960. While the EC, and even its predecessor the European Coal and Steel Community (ECSC) of 1952, had a genuine political vision for its future development, EFTA was from the beginning defined as a mere economic project. Its objectives were limited to the elimination of the tariffs on most industrial goods among its member's states. Thus, EFTA membership seemed compatible with the formal neutrality status of states like Sweden, Austria and Switzerland. EFTA became an alternative for those countries that shared the British scepticism towards a closer union, and that also adhered to the UK's more 'Atlantic line' in their foreign and security policies (i.e. Norway and Denmark). 1 When Denmark, as the first Nordic country, together with the UK, in 1961 applied for full membership in the EC, an application from Norway was submitted the year after. France vetoed however further negotiations and the same happened in 1967 when the same three countries had again applied for full membership of the community. ...read more.

Their two biggest worries were about democracy and sovereignty; national control of interest rates came third. Swedish voters may have taken note of the voices in Berlin, Paris and Brussels that have long extolled monetary union as a "political project"--a crucial step on the road to political union in Europe. The yes campaign tried to counter concerns about sovereignty with arguments about influence. The leaders of all the biggest parties and of most of Sweden's largest companies argued that the country risked being marginalised in the EU if it shunned the euro. Such arguments resonated with diplomats, international businessmen and the wealthy (Stockholm's richest suburb voted 75% in favour) but did not impress ordinary people, who may wonder how much influence a country of 9m can have in a Union soon to number 450m. Goran Persson's Social Democratic government had tried other arguments. Fairly late in the campaign, Mr Persson began to argue that the euro helps secure peace in Europe. Many yes voters cited this argument in explaining their choice. But the issue of peace cuts less ice in pacific Sweden, which has fought no war for almost 200 years, than in France or Germany. The yes campaigners tried, above all, to focus the debate on the economy. But in the event, exit polls suggest that economic issues mattered less than expected. When Sweden voted to join the EU in 1994, its economy was in big trouble. But this year Sweden is forecast to grow at 1.5% against 0.5% for the euro area; Swedish unemployment is at 5.4% compared with 8.9% in the single-currency zone. And the euro area is in a mess over its efforts to enforce fiscal discipline on countries using the single currency (see Charlemagne,) page 54. The murder of Anna Lindh has made the outcome of Sweden's approaching referendum on the euro harder to predict. The popular foreign minister was keenly in favour of adopting Europe's new currency, and her death may arouse sympathy votes on September 14th. ...read more.

The forty-year old 'democratic deficit' debate appeared once again, this time on Norwegian soil, reflecting the average citizen's removal from the 'powers that be in the European Union.'13 This debate effectively played a part in the referendum defeat. Surrendering any power to a supranational organisation is a direct loss of state sovereignty. Norway's government includes important internal constraints regarding European policy, including the referendum requirement, which made EU membership difficult. The 1994 anti-membership campaign portrayed Brussels as remote and interfering, with a different agenda from that of Norway. The European issue "opened up old territorial and cultural cleavages that cut across the functional and economic divisions in Norwegian society"14 Norway's independence has not been long lived. Norway was subservient to Denmark from 1536 to 1814, to Sweden from then until 1905, and to Germany in World War II. Norway eagerly protects this newfound sovereignty, a fact that has changed very little despite a larger and more dynamic EU. Although Norway had already given up state sovereignty through membership in institutions such as the United Nations, NATO, EFTA and the EEA, the people saw EU membership as much greater loss. The 'ever closer union' envisioned in TEU Article 1 and the Treaty of Rome, with no boundaries, no restraints, scared the Norwegian people. The common policies seemed to go too far, from the CFSP to the common market. The Norwegian people did not perceive the benefits of EU membership as outweighing this loss of sovereignty. EU membership raises issues of post industrial politics, those of environment, culture, women's rights and democratisation.15 In 1972 and again in 1994, the majority of the Norwegian voters were not prepared to turn to the Community to resolve these issues. Perhaps as the gap lessens between the centre and periphery of Norwegian society, as Europe finds itself more deeply integrated and as Norway's economic dependence on petroleum becomes apparent as a liability, Norway may find itself in a position to stand amongst its EU neighbours. However the Norwegians seem content to pursue their own social and economic objectives within the clutches, but outside the grasp of the EU. ...read more.