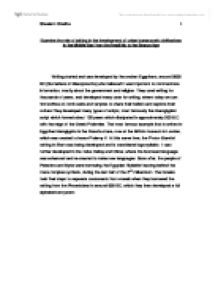 Examine the role of writing in the development of urban bureaucratic civilisations in the Middle East from the Neolithic to the Bronze Age Writing started and was developed by the ancient Egyptians, around 3000 BC (Sumerians of Mesopotamia) ...read more.

with the reign of the Greek Ptolemies. The most famous example that is written in Egyptian hieroglyphs is the Rosetta stone, now at the British museum in London, which was created to honor Ptolemy V. At this same time, the 'Proto- Elamite' writing in Elam was being developed and is considered logo-syllabic. ...read more.

Soon after, the people of Palestine and Syria were borrowing the Egyptian 'Syllable' leaving behind the more complex symbols, during the last half of the 2nd millennium. The Greeks took final steps to separate consonants from vowels when they borrowed the writing from the Phoenicians in around 800 BC, which they then developed a full alphabetical system. ?? ?? ?? ?? 1 Sheelam Chadha ...read more.