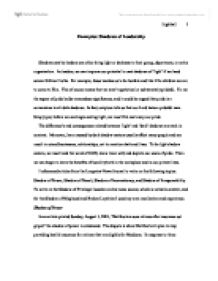 Examples: Shadows of Leadership Shadows cast by leaders can either bring light or darkness to their group, department, or entire organization. As leaders, we can improve our potential to cast shadows of 'light' if we heed several biblical truths. For example, Jesus teaches us to be humble and like little children we are to come to Him. This of course means that we aren't egotistical or subversively prideful. To me the aspect of pride holds tremendous significance, and it could be argued that pride is a cornerstone to all dark shadows. In fact, scripture tells us that our Lord hates a prideful man. Simply put, before we can begin casting light, we must first cast away our pride. The difference's and consequences related between 'light' and 'dark' shadows are stark in contrast. Moreover, harm caused by dark shadow casters usually affect many people and can result in ruined businesses, relationships, not to mention shattered lives. To be light shadow casters, we must heed the word of GOD, know inner self, and deplete our souls of pride. Then we can begin to learn the benefits of humility both in the workplace and in our private lives. I referenced articles from the Longview News Journal to write on the following topics: Shadow of Power, Shadow of Deceit, Shadow of Inconsistency, and Shadow of Irresponsibility. To write on the Shadow of Privilege I used an online news source, which is noted in context, and for the Shadow of Misplaced and Broken Loyalties I used my own recollection and experience. ...read more.

When in fact the software never met those standards and never became fully operational. These claims by Mr. Rice were also made to analysts in two separate meetings. Shortly after those meetings and based on Rice's claims Enron stock spiked to $90 dollars. Furthermore, according to the Justice Department, Mr. Rice's unit never made a dime. The deception by Mr. Rice had devastating effects on many people. For example, investors who trusted analyst reports on Enron and in particular Mr. Rice's unit had no idea that his claims were untrue. Obviously, many of those investors stood to lose most, if not all of their money. This case was especially tragic in that investor and broker relations were shaken throughout the stock market. All potential investors became much more careful in how they reviewed and interpreted corporate financial information. In fact the case of Enron still reverberates throughout the country and today many investors are weary of all corporate financial reporting. Shadow of Inconsistency In an article posted Saturday, July 31, 2004, "60 people to lose jobs as TXU mine closes" the shadow of inconsistency is illustrated nicely. This article tells of the closing of a Texas Utilities (TXU) coalmine near Mount Pleasant, Texas, and how it will effectively eliminate 60 jobs. Further, displaced workers will be given severance pay, but union workers will receive a lesser package than will non-union workers. The inconsistency involved here is the fact that in previous layoffs TXU has always given union employees the same severance benefits that they've given to non-union employees. ...read more.

In a report given to congress CPA Inspector General Stuart Bowen Jr. said, "His teams have found several management problems that are not surprising given the dangers of work in Iraq." Regardless of the reasoning this represents a grievous case of irresponsibility by leaders responsible for the reconstruction. What's worse, the article doesn't mention any pending disciplinary action or redress that will be taken to rectify or prevent this situation from occurring again. The funds were awarded for the sole benefit of the Iraqi people without exception however that's not what happened. As an example of serious irresponsibility, this incident casts a dark shadow of international proportion. Moreover, this event occurs at a critical time when America's image as an ethical world power is already suffering. What is notable and common to each shadow of power can be summed up in one word, and that word is 'trust'. As we consider the aspect of each shadow of power we need to realize that if we cast light then followers will gain trust. On the other hand, if we are unethical and misuse power we cast darkness, and this is when our followers will lose trust. So, as leaders and according to the above examples, we can see that ethical challenges to leadership persist. Therefore, it is imperative that we know the meaning of and the implication that each shadow of power may have on our decisions as managers. We can choose to cast shadows of light rather than clouds of darkness. 1 Lighthall ...read more.