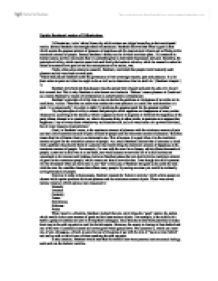 Explain Bentham's version of Utilitarianism. Utilitarianism, is the 'ethical theory by which actions are judged according to their anticipated results. Jeremy Bentham first brought about utilitarianism. Bentham believed that what is good is that which equals the greatest amount of pleasure or happiness and the least amount of pain and suffering to the maximum amount of people. Jeremy Bentham's theory can be divided into three parts. His research on human nature, and the conclusion that it is something that is motivated by pleasure and pain. Secondly, the principle of utility, which was his moral rule and finally the hedonic calculus, which he created in order for others to measure how good or bad the consequences of an action, was. Firstly, after some extensive research, Bentham, concluded that people would naturally seek pleasure and try very hard to avoid pain: 'Nature had placed mankind under the governance of two sovereign masters, pain and pleasure. It is for them alone to point out what we ought to do as well as to determine what we shall do.' (Bentham chapter I, I) Bentham truly believed that pleasure was the purest form of good and pain the sole evil, he saw this a moral fact. This is why Bentham is also known as a hedonist. ...read more.

The question is, would you leave one of you colleagues, a friend, to save the rest of the group or go with the rule of 'leave no man behind' and end up with a risk of none of them reaching the pick up point. In this situation, Bentham would state that one should leave their personal and emotional feelings aside and use the hedonic calculus. There is no guarantee that all will survive even if they leave their wounded comrade, it would just speed them up. There is also possibility that they could all survive if they leave one man behind. Therefore as a result it seems more logical, and by going with Bentham's theory the 'good' thing to do is to leave your fellow soldier behind. This is because there is a bigger risk of them all being killed since the wounded soldier is slowing them down and there is a lower risk of them being all killed if they leave a man behind. It is just the question of whether they are willing to sacrifice one life or the life of the entire group. Bentham's version of utilitarianism cannot be defended. Discuss I believe that Jeremy Bentham's version of utilitarianism isn't completely undependable, however, it is much easier to criticise it as it has more imperfections than perfection. ...read more.

It would just end up confusing someone. The third difficulty concerns justice. The utilitarian way means that the greatest amount of pleasure for the greatest amount of people. Therefore the Nazis' torturing the Jews would have been 'good' in a utilitarian's eye if there were a greater population who got pleasure out of it. Or 4 boys scaring and hitting a cat for 'fun' would be considered to be 'good' because those four boys got pleasure out of it compared to the one cat that suffered. The final difficulty of utilitarianism is that it fails to consider the fact that the view of good and bad, pleasure and pain depends on the people, culture, lifestyle and background. What one person from one background believes is good may not be the same as what someone from another background would consider happiness and pleasure to be, i.e., a man who lives in the jungle would consider bugs to be delicious food and that would bring them pleasure however give that same thing to a rich girl from Beverly hills, USA you would not get the same reaction as the man in the jungle. In conclusion, one cannot say that Bentham's version of utilitarianism cannot be defended since his theory of striving to get the most pleasurable results is a logical and sensible way of living, however in reality it is inconvenient and in some cases it will just end up confusing us. ...read more.