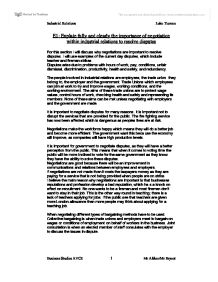 E1: Explain fully and clearly the importance of negotiation within industrial relations to resolve disputes For this section I will discuss why negotiations are important to resolve disputes. I will use examples of the current day disputes, which include teacher and fireman strikes. Disputes arise due to problems with hours of work, pay, conditions, unfair dismissal, discrimination, productivity, health and safety, and redundancy. The people involved in industrial relations are employees, the trade union they belong to, the employer and the government. Trade Unions which employees can join at work to try and improve wages, working conditions, and the working environment. The aims of these trade unions are to protect wage values, control hours of work, checking health and safety and representing its members. None of these aims can be met unless negotiating with employers and the government are made. It is important to negotiate disputes for many reasons. ...read more.

Collective bargaining is when trade unions and employers meet to bargain on wages or conditions of employment on behalf of workers in the business. Joint consultation is when an elected member of staff consulates with the employer to discuss the issues in dispute. All businesses need to recognise that discrimination in society is widespread and that employment practices often discriminate against groups of employees, particularly women and ethnic minority workers. Trade unions campaign for justice for people who face discrimination at work and they advise employers on ways that they can achieve equal opportunities. Some trade unions use high profile campaigns on equal opportunities - like the RESPECT festival, which is held in the summer to celebrate multi-cultural diversity. E2: Set out the aims and the objectives of both parties in a clear, logical format. For this section I will present the aims and objectives of teachers, government and the trade union. ...read more.

The Governments aim is: > To come to a reasonable agreement which satisfies both parties. This aim has not been met lately as the government refuse to increase the London Allowance and also meet the demands of the fire fighters. The Governments objectives are: > To prevent strike action. > To avoid damaging professions reputation. > To listen to teachers and unions and be sympathetic. > To prevent other professions revolting. The government have failed to do this as the firemen strike has encouraged more industries to go on strike and make more demands of the government. > Produce an agreement that prevents teachers from striking again. > Not to be bullied by unions and public pressure. The government need to be aware of how the public is thinking as they have a strong influence on disputes. > Make sure the public doesn't swing too much against them. This is very important as when it comes to elections the public will go against the Labour Government. Industrial Relations Luke Tiernan Business Studies AVCE 1 Mr Afshar/Mr Bryant ...read more.