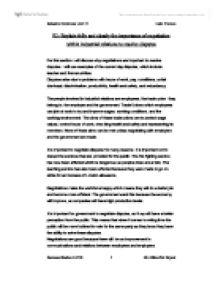 E1: Explain fully and clearly the importance of negotiation within industrial relations to resolve disputes For this section I will discuss why negotiations are important to resolve disputes. I will use examples of the current day disputes, which include teacher and fireman strikes. Disputes arise due to problems with hours of work, pay, conditions, unfair dismissal, discrimination, productivity, health and safety, and redundancy. The people involved in industrial relations are employees, the trade union they belong to, the employer and the government. Trade Unions which employees can join at work to try and improve wages, working conditions, and the working environment. The aims of these trade unions are to protect wage values, control hours of work, checking health and safety and representing its members. None of these aims can be met unless negotiating with employers and the government are made. It is important to negotiate disputes for many reasons. It is important not to disrupt the services that are provided for the public. The fire fighting service has now been affected which is dangerous as peoples lives are at risk. The teaching service has also been affected because they were made to go on strike for an increase of London allowance. Negotiations make the workforce happy which means they will do a better job and become more efficient. The government want this because the economy will improve, as companies will have high production levels. It is important for government to negotiate disputes, as they will have a better perception from the public. This means that when it comes to voting time the public will be more inclined to vote for the same party as they know they have the ability to solve these disputes. Negotiations are good because there will be an improvement in communications and relations between employees and employers. If negotiations are not made then it costs the taxpayers money as they are paying for a service that is not being provided when people are on strike. ...read more.

This has had a big affect on industrial relations as it has stopped r****m between people with different colours and different cultures. Legislation has helped the unions stop the effects of r****m in the workplace. Another legislation is the Equal Pay Act of 1970. The purpose of the Equal Pay Act is to eliminate discrimination between women and men in the same employment in pay and other terms and conditions of their contracts of employment such as piecework, output and bonus payments, holidays and sick leave. Due to the impact of legislation a woman can now apply to an industrial tribunal for a decision. At a tribunal hearing both persons making the complaint and the person against whom it is made can be represented by anyone they choose. The legislation benefits the employee as they will be confident, stress free, and will have good morale. It also benefits the employer, as they will have happy workers, increased output and low sickness levels. The benefits for industrial relations are that Equal pay cases are notoriously slow and complex. A questionnaire will be provided to make it easier for individuals to request key information from their employer when they are deciding whether to bring a case to court and will simplify and speed up the tribunal processes benefiting both employers and employees. This could lead to settlement or resolution in some cases. A new legislation called the Employment Act 2002 has helped the industrial relations considerably. It has made an impact on industrial relations, as it will alter the way the unfair dismissals are judged so that procedural shortcomings can be disregarded. Employers will always have to follow the basic procedures, but will no longer be penalised for irrelevant mistakes beyond that. This means that the dismissal must have been for a fair reason and the employer must have acted reasonably in treating it as a reason for dismissing the employee. ...read more.

If this happened a solution to the dispute would not have been found. This would badly affect the teachers and the government as the dispute would not be solved. This means the teachers would continue to strike and the government would have a bad public perception. However, the teachers may also loose public support as the more they are on strike the less time they are spending teaching. This means children are missing out on an education, which parents will strongly disagree with. It could be that the government agreed with the teacher's demands and paid them what they wanted. This would be good for the teachers as they would not have to leave London to find work elsewhere. This would have a bad impact on the government, as it would make them look weak, which means other professions would start to demand money. This would badly affect economy, which would result in an increase in tax. If this happened then the public support for the government would decrease and could result in them not being voted for in the next election. The government could have offered new initiatives to pay the teachers. This could be in the way of performance related pay. This would make an impact on the teachers as it allows good teachers to stay in the classroom, rather than forcing them to seek administrative posts to enhance salaries. This would be attractive for teachers, as would the possibility of higher rewards in general for one of the most important and influential jobs in the country. ACAS could have negotiated on behalf of the teachers instead of arbitrating the dispute. This would help solve the dispute as there would be no pointless arguments as ACAS would only be representing not standing up for the teachers. A3 Describe current trends in industrial relations It's about the changing face of trade unions. Talk about number of union members going down and the advantages n disadvantages of it and what influences them to go down. Industrial Relations Unit 11 Luke Tiernan Business Studies AVCE 1 Mr Afshar/Mr Bryant ...read more.