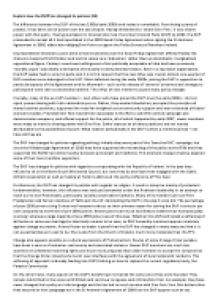 Explain how the DUP has changed its policies (26)

Transfer-Encoding: chunked ﻿Explain how the DUP has changed its policies (26) The difference between the DUP of the late 1990s/early 2000s and today is remarkable. From being a party of protest, it has been one of power over the last decade. Having threatened to ?smash Sinn Fein?, it now shares power with that party. Having overtaken its internal bloc rival, the Ulster Unionist Party (UUP) by 2003, the DUP proceeded to accept all it had repudiated in the 1998 Good Friday Agreement when signing the St Andrews Agreement in 2006, albeit also obliging Sinn Fein to support the Police Service of Northern Ireland. Unprecedented electoral success amid Unionist anxieties over the Good Friday Agreement offered Paisley the chance to become First Minister and end his career as a ?statesman? rather than as a bombastic, marginalised oppositional figure. Paisley?s new-found willingness to find politically acceptable all that had been previously ?morally unjust? was clearly a derivative of the party?s newly dominant status. Even in a top-down organisation, the DUP leader had to carry his party and it is in this respect that the new influx was crucial. Almost one-quarter of DUP members once belonged to the UUP. Most defected during the early 2000s, joining the DUP in opposition to particular aspects of the Agreement and its aftermath ? such as the release of ?terrorist? prisoners and changes to policing and were seen as ostensibly hardline. ...read more.

Whether this shift will herald a softening of attitudes on same-s*x marriage (or abortion) remains to be seen, as DUP Assembly members appear resolutely against change at present. Arlene Foster as leader is proof that the DUP has changed in many ways and that it is not as patriarchal as it used to be. She is also from the Church of Ireland, much more moderate than the FPC. Change also appears possible on cultural expressions of Protestantism. Routes of some Orange Order parades have been a source of sectarian controversy and associated violence. Newer DUP members are much less assertive of unfettered marching rights and much more prepared than older members to accept the compromise that the Orange Order should only march near interfaces with the agreement of local nationalist residents. This softening of approach is already feeding into DUP thinking on how to replace the current regulatory body, the Parades Commission. On the other hand, many aspects of the DUP?s beliefs have remained the same since they were founded. They remain committed to the union with Britain and continue to oppose and criticise Sinn Fein. An example, they have never changed their policy on Irish language and this has led to much tension with Sinn Fein. Sinn Fein believe that they secured an Irish Language act in the St Andrew?s Agreement of 2006 but the DUP oppose such an act. ...read more.

It goes without saying that the DUP are in favour of flying the Union flag all year round, another area in which their policy has not changed. The DUP has also not changed its policies on the issue of education. The DUP calls for all schools to be treated equally through removal of the statutory advantage for Irish Medium and Integrated schools. It also calls for greater autonomy to be given to schools so that a controlled or maintained school could enjoy the autonomy which Voluntary Grammars and Integrated schools currently benefit from. It is in support of academic selection. Finally, the DUP has remained true to its commitment to leaving the EU. This is another policy that harkens back to the days of Paisley, who was deeply suspicious of the EU. The DUP is the only party of the ?big five? that are backing the leave campaign for the referendum on 23rd June. To conclude, the DUP ability to adapt is a huge strength. It has managed to do a 360 degree turn on its opposition to the GFA and working with SF to working integrally with them in the NI Assembly to such an extent that other parties call it a carve up. They managed to create the deal and bring most of their supporters with them. There is no doubt that it has had many policy changes since 2003, but at the same time they have stuck fast on issues such as homosexuality, the EU and education. What remains to be seen is how Arlene Foster?s leadership will reflect on any new policies. ...read more.