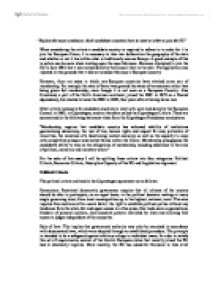 "Explain the main conditions which candidate countries have to meet in order to join the EU" When considering the criteria a candidate country is required to adhere to in order for it to join the European Union, it is necessary to take into deliberation the geography of the state and whether or not it lies within what is traditionally seen as Europe. A good example of this in action can be seen when looking upon the case Morocco. Morocco attempted to join the EU in July 1987, but it was turned down by the Council later in the year. The application was rejected on the grounds that it did not consider Morocco a European country. However, there are cases in which non-European countries have attained some sort of membership. For example the state of Israel was granted the status of an associate rather than being given full membership, even though it is not seen as a European Country. Also Greenland, a part of the North American continent, joined the EEC in 1973 as a Danish dependency, but elected to leave the EEC in 1983, four years after attaining home rule. ...read more.

The principle is intended to be a safeguard against arbitrary rulings in individual cases. In order to satisfy this set of requirements, several of the Central European states that recently joined the EU had to drastically improve. More recently, the EU has asked for Romania to take strict measures to resolve its problems with regards to organised crime and corruption. It has therefore threatened to emplace sanctions upon Romania if it does not meet the requirements before the assigned deadline. Human Rights: Human rights are those rights which every person holds because of his/her quality as a human being; human rights are "inalienable" and belonging to all humans. If a right is inalienable, that means it cannot be bestowed, granted, limited, bartered away, or sold away (e.g. one cannot sell oneself into slavery). These include the right to life, the right to be prosecuted only according to the laws that are in existence at the time of the offence, the right to be free from slavery, and the right to be free from torture. ...read more.

Legislative Alignment This indicates that all prospective members must enact legislation in order to bring their laws into line with the body of European law built up over the history of the Union, known as the acquis communautaire. In preparing for each admission, the acquis is divided into separate chapters, each dealing with different policy areas. For the process of the fifth enlargement that will conclude with the admission of Bulgaria and Romania (expected in 2007) there were 31 chapters. For the talks with Croatia and Turkey the acquis has been split further into 35 chapters. When considering Turkey's application, it is argued that Turkey does not meet the requirements of Human Rights and that it only is considered a European country because 3% of its land lies in tradition Europe. With respects to Romania and Bulgaria, it has been agreed that they enter the Union in the beginning of 2007 only if they meet the requirements of Rule of Law which they are currently lacking. In this particular case it is expected that for the first time in history this supernational body will be emplacing sanctions on a member state. ?? ?? ?? ?? ...read more.