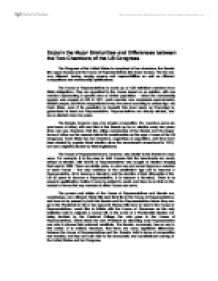 Explain the Major Similarities and Differences between the Two Chambers of the US Congress.

Explain the Major Similarities and Differences between the Two Chambers of the US Congress. The Congress of the United States is comprised of two chambers, the Senate (the upper house) and the House of Representatives (the lower house). The two are very different, having varying powers and responsibilities as well as different compositions and membership qualifications. The House of Representatives is made up of 435 individual members from State delegations. They are appointed to the House based on population, with one member representing a specific area of similar population - since the membership number was capped at 435 in 1911, each member now represents approximately 620000 people, but this is reapportioned every ten years according to census figures. ...read more.

Each State has two Senators, regardless of population, and they have been elected by popular direct election since the seventeenth amendment in 1913, but were originally elected by State legislatures. The House of Representatives is, however, also similar to the Senate in many ways. For example, it is the case in both Houses that the incumbents are nearly always re-elected, with 98.2% of Representatives who sought re-election keeping their seat in 1998. There are similar rules on who can and cannot become a member of each House - the only restrictor is the candidate's age (25 to become a Representative, 30 to become a Senator), and the duration of their citizenship of the US (6 years to become a Representative, 9 to become a Senator). ...read more.