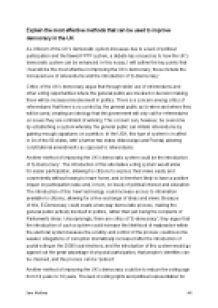 ﻿Explain the most effective methods that can be used to improve democracy in the UK As criticism of the UK?s democratic system increases due to a lack of political participation and the flawed FPTP system, a debate has ensued as to how the UK?s democratic system can be enhanced. In this essay, I will outline the key points that I feel will be the most effective in improving the UK?s democracy; these include the increased use of referendums and the introduction of ?E-Democracy?. Critics of the UK?s democracy argue that through wider use of referendums and other voting opportunities where the general public are involved in decision making; there will be increased involvement in politics. There is a concern among critics of referendums that there is no control by the general public as to when and where they will be used; creating an ideology that the government will only call for referendums on issues they are confident of winning. ...read more.

Unsurprisingly, there are critics of ?E-democracy?, they argue that the introduction of such a system could increase the likelihood of malpractice within the electoral system because the scrutiny and control of the process could become weaker. Allegations of corruption dramatically increased after the introduction of postal voting in the 2005 local elections, and the introduction of this system would go against out the great advantage of physical participation, that people?s identities can be checked, and the process can be ?policed?. Another method of improving the UK?s democracy could be to reduce the voting age from 18 years to 16 years. The lack of voting rights and political representation for under 18?s means that their needs, views and interests are often put to one side, or ignored all together. By lowering the voting age, greater attention may be given to issues such as further education or drugs policy. The lowering of the voting age may also lead to stronger political engagement among young people. ...read more.

This system would, however, cause an increase in coalition or minority governments, which are considered to be a weak form of government, and would introduce too many small parties, some of whom are extremist (EDL). Another, somewhat controversial, method of improving the UK?s democratic system could be to introduce compulsory voting. This would force people into the political process and make the results of election more legitimate, and would mean that everyone?s voice is heard. This idea could, however, force people with little or no political knowledge to vote, meaning results of elections could be influenced by uninformed voters. This could also be seen as an infringement of an individuals civil liberties. The UK?s democratic system is in crisis due to a lack of political participation, individualization and an overall lack of interest in politics. Through the introduction of the methods outlined in this essay, such as increased use of referenda, introduction of PR and reducing the voting age from 18 to 16, the UKs democratic system could be greatly improved, made fairer and more important in the minds of the general population. Sam McKinty AX ...read more.