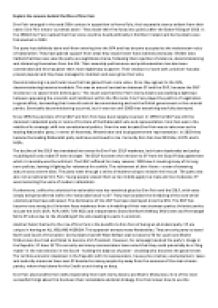 Explain the reasons behind the rise of Sinn Fein and the problems they now face.

Transfer-Encoding: chunked ﻿Explain the reasons behind the Rise of Sinn Fein Sinn Fein emerged in the early 20th century in opposition to Home Rule, their separatist stance evident from their name: Sinn Fein means ?ourselves alone.? They made their first foray into politics after the Easter Rising of 1916. In the 1980s Sinn Fein realised that their voice could be heard politically in Northern Ireland and Gerry Adams was first elected in 1983. The party has definitely done well from entering into the GFA and has become accepted as the mainstream voice of nationalism. They have gained support from areas they would never have claimed previously. Middle class Catholic families now view the party as a legitimate choice, following their rejection of violence, decommissioning and distancing themselves from the IRA. Their assembly performance and professionalism has also been commended and this has given them more legitimacy to govern. Their decision to 'work with unionism' has also proved popular and they have managed to maintain and even grow their vote. Decommissioning is a particular issue that has gained them more votes. Once they agreed to the GFA, decommissioning became inevitable. This was an area of contention between SF and the DUP, because the DUP insisted on no ?government before guns.? The result was that Sinn Fein's Gerry Adams was walking a tightrope between appeasing the unionists and hardliners within the IRA ranks. ...read more.

The terrible economic slowdown in the Republic with its repossessions, house price crashes; unemployment, taxes and austerity measures have seen SF boosted as many people shy away from the excesses of the main stream parties, whom they blame for the Credit crunch being so deep. Sinn Fein also benefits from skilful leadership from both Gerry Adams and Martin McGuiness. One of the most successful things about this has been their remarkable electoral strategy. Sinn Fein knows how to use the proportional representation system to its full effect. Within a constituency they will tell voters how to use their first and second preferences on a street by street basis. This ensures that votes are not wasted. Sinn Fein have also benefitted from effective lobbying in the US. The American supporters of Sinn Fein are called Friends of Sinn Fein USA. Every year, American supporters of Sinn Féin gather at the Sheraton Hotel New York Times Square Hotel in Manhattan for a lavish dinner. The New York dinner was, and is, the biggest money-spinner of the fundraising calendar for an organisation that has raised $12 million (€10.8 million) since it was established in 1995 in the early days of the peace process. Problems they face SCANDAL AND LEADERSHIP: Sinn Fein faces the awkward question about whether it has the ability to shake off the murky past. ...read more.

There have been open and sometimes bitter squabbles, which show the true face of mandatory government. Divisions seem as deep as ever at times. The failure to push through the Welfare Reform Act has been highly divisive and cause derision in the DUP leadership who accused SF of electioneering so close to the election. There seemed to be little prior consultation on the issue. Gregory Campbell's comments on the Irish language have also caused annoyance in SF circles with many blaming Robinson for not doing more to discipline him. This also led to the awkward recordings of Gerry Adams and Michelle Gildernew calling unionists a number of names beginning with b! This perhaps shows more clearly the deep divisions underlying the public face. Finally the current culture wars also highlight deep policy differences. The DUP support for a conscience clause in the face of the Ashers 'gay cake' debate goes against the SF equality agenda. Whether stable government could take place after the next election remains unclear with such deep divisions. SDLP revival: This is especially so now that they have entered opposition with the UUP against Sinn Fein and DUP. It remains to be seen how effective this will be, but it will present the SDLP as a real alternative to Sinn Fein. It opens up a popular and needed cross-community opposition in the Assembly and is a sign of political maturity. ...read more.