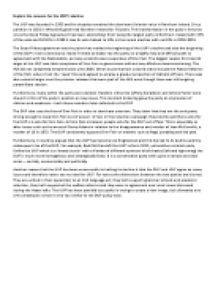 Explain the reasons for the UUPs decline in Northern Ireland.

Transfer-Encoding: chunked ﻿Explain the reasons for the UUP?s decline The UUP was founded in 1905 and for decades remained the dominant Unionist voice in Northern Ireland. Since partition in 1921 it effectively governed Northern Ireland for 70 years. The transformation in the party?s fortunes since the Good Friday Agreement has been astonishing: from being the largest party in Northern Ireland with 33% of the vote and 10 MPs in 1998 it saw its vote halved to 13% in the recent election with no MPs in 2010-2015. The Good Friday agreement was the point that marked the beginning of the UUP?s decline and also the beginning of the DUP?s rise to dominance. David Trimble as leader too the party on a highly risky and difficult path to agreement with the Nationalists, as many unionists were suspicious of Sinn Fein. ...read more.

Furthermore, many within the party were divided. Hardline critics like Jeffery Donaldson and Arlene Foster were staunch critics of the party?s position on key issues. This constant bickering gave the party an impression of division and weakness ? both these members later defected to the DUP. The DUP also uses the fear of Sinn Fein in order to dominate unionism. They claim that they are the only party strong enough to keep Sinn Fein out of power. In fact, in their election campaign they bluntly said that a vote for the UUP is a vote for Sinn Fein. As Sinn Fein increases, people vote for the DUP out of fear. This is especially so after issues such as the arrest of Gerry Adams in relation to the disappearance and murder of Jean McConville, a mother of 10 in 1972. ...read more.

the DUP is much more homogenous and ideologically fixed. It is a conservative party with quite a narrow and clear vision ? socially, economically and politically. Another reason that the UUP has been unsuccessful in halting its decline is that the DUP and UUP agree on many issues and therefore voters see no need for UUP. For voters the distinctions between the two parties are blurred. They are united in their opposition to an Irish language act, they both support grammar schools and academic selection, they both supported the welfare reforms and they were in agreement over most issues discussed during the Haass talks. The UUP has been partially successful in trying to create a new image, but ultimately one of its drawbacks is that it is far too similar to the DUP policy wise. ...read more.