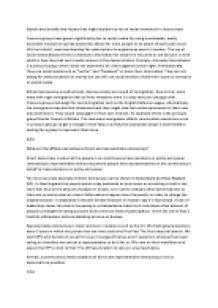 &quot;Explain the rise of Social Movements&quot; &amp; &quot;What are the differences between Direct and representative democracy?&quot;

﻿Explain and identify two factors that might explain the rise of social movement in recent years Pressure groups have grown significantly due to social media. By using a worldwide, easily accessible medium to spread awareness allows for more people to be aware of particular issues. UK Uncut didn?t need membership for subscriptions to organise an event in London. The use pf social media allowed them to distribute information for anyone in any area to see and join in with which is how they had such a wide turnout at the demonstration. Similarly, Amnesty International is a pressure group which raises the awareness of crimes against human rights internationally. ...read more.

They would campaign for their own interest. An example of this is the pressure group Muslim Council of Britain. The two ways immigration affects communities would see a rise in pressure groups to get a change in their favour as they feel passionate about it and therefore looking for a group to represent their issue. 8/10 What are the differences between Direct and representative democracy? Direct democracy is when all the people in an constituency have decisions on policy and power contrasting to representative democracy where people elect representatives on the constituency?s behalf to make decisions on policy and power. The most accurate example of direct democracy can be shown in Switzerland and New England (US). ...read more.

In the UK, we?ve had a Scottish referendum and are debating an issue on Europe. Representative democracy is most common in locations such as the UK. We hold general elections every 5 years in which one person has one vote under the First Past The Post electoral system. We elect MPs who decide on issues for us as it is argued that we aren?t experts in all areas that need voting on therefore we entrust a representative to do it for us. We vote on their manifesto and expect the MP to stick to that. The UK has pluralism to vote on a representative. Overall, a constituency needs a balance of direct and representative democracy to be as democratic as possible. 7/10 ...read more.