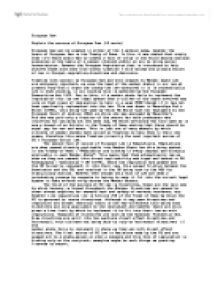 Explain the sources of European Law.

European Law Explain the sources of European Law (12 marks) European Law can be created in either of the 4 several ways, however the basis of European Law is the Treaty of Rome. In this it was stated that simply that it's whole basis was to create a form of unity in the world amoung national economies on the basis of a common interest and/or an aim to bring social harmonistaion. However the European Legislation that is introduced to help achieve these aims come from either treaties ( this beings the primary source of law in Europe),regulation,directives and decisions. Treaties with concern to European Law and with respect to Member state law are extremely important, as once the head of the member state( in our law at present Tony Blair) ...read more.

This is just one of many example by which citizens of member states have relied on Treaties to help them in their own cases, therefore this makes Treaties primarily the most important source of EU ( European Union) law. The second form of source of European law is Regulations. Regulations are when passed directly applicable into Member State law this being stated in the Treaty of Rome : "Regulation are binding in every respect and directly applicable in each Member State". This means that they automatically law as soon as they are passed, this direct applicability was tryed and tested in RE Tachographs : Commission v UK (1979), where the regulation was passed and the UK failed to implement it into their law, this caused friction between the Commission and the UK, and resulted in the UK being took to the ECJ for disciplinary actions. ...read more.

Examples of directives are such as the Consumer Protection Act. Also directives are split into two sections direct effect directives and horizontal, with citizens not being able to rely on horizontal directives if the member state fails to implement it where as they can with direct effect directives. The final source of EU law is Decisions made by the EU and are passed out to a state,person or even a company and this form of legislation is binding only on the recipient, examples maybe be such things as granting licences to export. Even though all four of these forms of EU legislation are vital to help form and achieve the goals aimed for and set down in the original Treaty of Rome, there is also a lot of other things by which the Member States leaders participate in, in the hope for harmony these being such things as global conferances and meetings to discuss changes that may be required. ...read more.