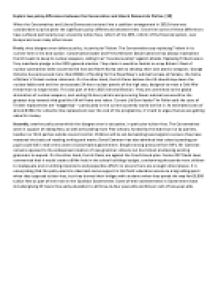 Transfer-Encoding: chunked ﻿Explain two policy differences between the Conservative and Liberal Democratic Parties. [10] When the Conservatives and Liberal Democrats entered into a coalition arrangement in 2010 there was considerable surprise given the significant policy differences between them. Since then some of these differences have surfaced particularly over university tuition fees, reform of the NHS, reform of the financial system, over Europe and over many other issues. Firstly, they disagree over defence policy, in particular Trident. The Conservatives say replacing Trident in its current form is the best option. Conservative leader and Prime Minister David Cameron has always maintained the UK needs to keep its nuclear weapons, calling it an "insurance policy" against attacks. ...read more.

This was part of their 2015 General Election. They are committed to the global elimination of nuclear weapons, and ending 24-hour patrols and procuring fewer submarines would be the greatest step towards that goal the UK will have ever taken. Current Lib Dem leader Tim Fallon said the costs of Trident replacement are “staggering” – particularly in the current austerity world we live in. At estimated costs of almost £25bn for a like-for-like replacement over the cost of the programme, it’s hard to argue that we are getting value for money. Secondly, another policy area which the disagree over is education, in particular tuition fees. The Conservatives were in support of raising fees, as well as founding more Free schools, funded by the state but run by parents, teachers or third parties outside council control. ...read more.

On the other hand, the Lib Dems are against the Free Schools plan. Former MP David Laws commented that it would create a £4bn hole in the school buildings budget, condemning thousands more children to inadequate and crumbling classrooms and jeopardise efforts to ensure there are enough school places. It is unsurprising that the party wants to claw back some support in this field: education was once a big selling-point when they opposed tuition fees, but they burned their bridges with students when they paved the way for £9,000 tuition fees as part of their role in the Coalition Government. Some of their achievements in Government have included giving 15 hours free early education to all three-to-four year-olds and 40 per cent of two-year-olds. ...read more.